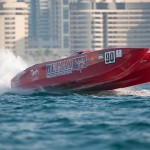 Sunday, 3 October, STRESA (Italy): Welmax has been reinstalled as winner of the Edox Pole Position and reclassified in race 1 of the Italian Grand Prix after a successful appeal, with the race Jury overturning the original penalty.

The Jury heard statements from Welmax, the race director and the technical commissioner, deciding that whilst it was clarified that the engine air box was not correct, the rules do not specify a penalty for this kind of infringement and that the original result from the Edox Pole Position stands with Welmax given a post-race one lap penalty [time], re-classifying the Norwegian outfit in sixth place in race 1.