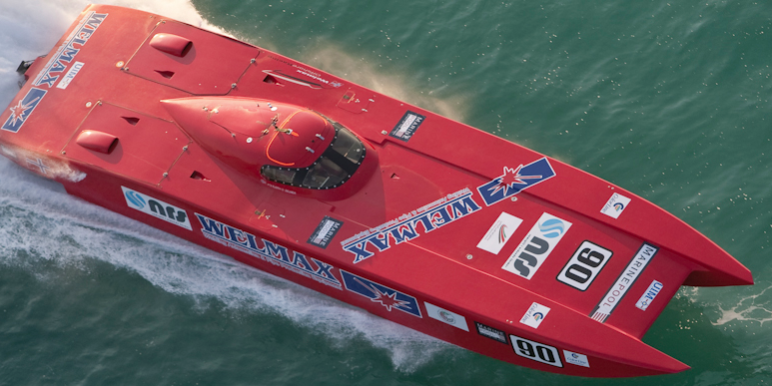 Sunday, 3 October, STRESA (Italy): Fazza’s Arif Al Zafeen and Nadir Bin Hendi produced a champions’ drive to win race 2 of the Italian Grand Prix to become the 2010 UIM Class 1 European Champions, with Primatist-GSG Ceramic Design finishing second ahead of Skydive Dubai.
It was a clinical performance by the World Champions who mastered the difficult conditions and poor visibility, to complete a flag to finish 18th career win for Al Zafeen and Bin Hendi, and secure an eighth European crown for the Victory Team, completing the 16 lap 64.60Nm course in 39mins 31.20secs at an average speed of 180.25kmh/112.03mph. “I have been waiting for this title for many years and I am proud to have finally won it, especially with Arif,” said Bin Hendi. “Our plan was to get the two long laps out of the way early, so we had to push very hard from the start. We did this and once we had established a comfortable lead we could ease off.”
But it was the titanic three-way fight for the final podium places between Primatist-GSG Ceramic Design, Skydive Dubai and Welmax, running line-astern and separated by just seconds for over half the race distance, that produced a nail biting and dramatic finish-line incident at the end of the race.
After moving up into second place on lap 8, Primatist-GSG Ceramic Design’s Guido Cappellini and Marcello Menegatto held off a sustained challenge from Skydive Dubai, themselves under severe pressure from a hard charging Welmax, who had moved from eighth on the start line to fourth place.
On the penultimate lap, Welmax moved into third place and closed in on PrimatistPrimatist-GSG Ceramic Design when, with the finish line in sight, the Norwegian outfit suddenly slowed, veering off the course with Skydive Dubai crossing the line third place.

Both Relekta and Giorgiofshore overcame the conditions to earn valuable points, finishing in fifth and sixth places. There was disappointment for Negotiator stopping on lap thirteen, but classified seventh picking up four points to secure second place in the European Championship for Giovanni Carpitella and Chris Parsonage, and frustration for Rashed Al Tayer and John Tomlinson, whose race ended on lap 9 after running in second place in Team Abu Dhabi.