MTI Boat, Featured In Powerboat Magazine, On Display At The Miami Boat Show 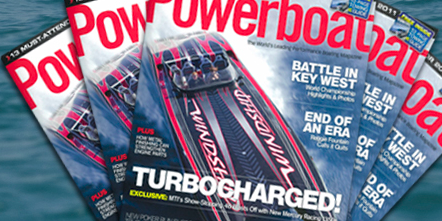 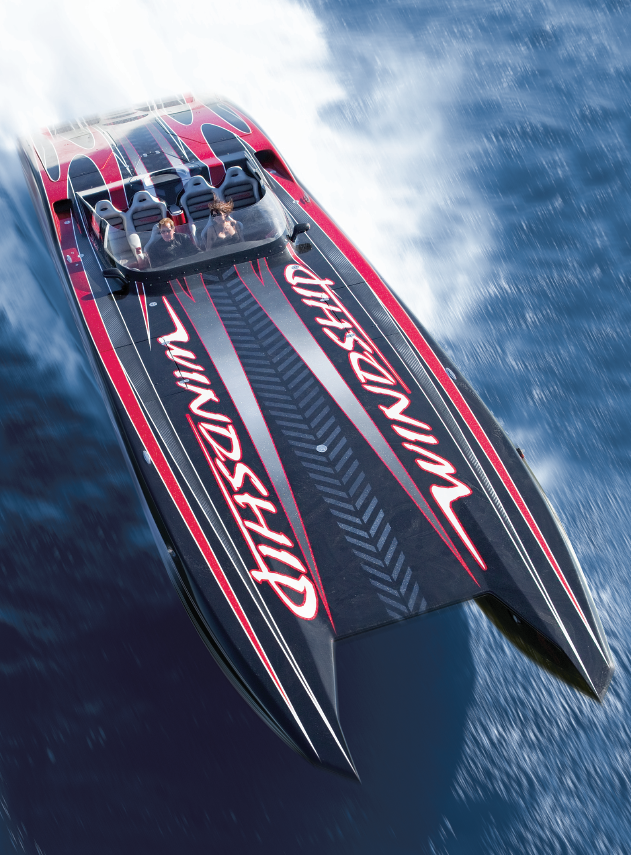 What a difference a year makes. Just ask Georgia native and 40-year boating veteran John Woodruff. If he had not attended the Miami International Boat Show in early 2010, there’s a very good chance his new 48-foot catamaran from Marine Technology Inc. (MTI) wouldn’t be on display in the MTI booth at this year’s Miami show.

Woodruff had been planning to power his new 48 MTI with a pair of Mercury Racing 1200SCi engines with No. 6 drives. That was until David Woods, owner of Pier 57, walked him over to the Cigarette Racing booth to see the all-new Mercury Racing 1350 QC4v engines and M8 drives installed in the AMG-inspired 46-foot V-bottom.

“I would have this boat with the 1200s had I not gone to the Miami show,” Woodruff said, adding that it was well worth missing the 2010 boating season to wait for one of the first sets of 1350 engines off Mercury’s production line. “I saw those motors and said, ‘You’ve got to be kidding me.’ I got to talk with Fred Kiekhaefer (Mercury Racing’s president) right there, and he told me all about the engines, the more robust drive and the one-year warranty, and that was it.”

Not only was Woodruff sold on the 1,350 hp produced by the quad-cam, four-valve, turbocharged engines, he also was impressed with the monstrous torque curve that Mercury claims ensures unwavering power throughout by controlling boost and regulating torque at high engine outputs.

And now that Woodruff has taken delivery of his 48-footer, he can attest to the continuous power supply, and is more than pleased with his decision.

“With these motors it seems like you’re actually letting the engine make horsepower, not forcing it like it seems with other high-performance engines,” said Woodruff, who trailered his boat down to Fort Myers, Fla.—just a week after getting the boat in early December—for an exclusive Powerboat photo shoot and inspection. “I mean, when you drive the boat, you can feel it. It’s a 48-footer and it does not feel like you’re forcing it to go at all.

“I don’t know how fast it will go yet, but I’m not concerned with top-end,” he added. “That’s why I put everything in here that I wanted—air conditioning, heating, mounts to carry extra props in the engine compartment, flat-screens and a full cabin. What’s 5 mph when I’m talking about 170 mph? This is a pleasure boat— I’m not out to beat anybody.”

Woodruff is more of a cruising kind of guy—if you can call 120 to 130 mph cruising. His intention for poker runs and when boating on his home lake, Georgia’s Lake Lanier, is to keep the boat at a “lowrpm, high-rate-of-speed cruise.” Still, he did open it up a little during his first week with the boat, running it up to 160 mph at 6000 rpm (the engines have a full-throttle rpm range to 6500) with two large 41″-pitch Mercury props.

“The thing that impresses me is how docile and well-mannered the 1350s are at low speed such as around the docks or loading on and off the trailer,” said MTI owner Randy Scism. “They idle so nice and shift beautifully. It’s all done electronically with the computer so you’re at 850 rpm at neutral and 700 in gear—not 680 or 720, both engines are at 700.

“But the most impressive part is that around 2,500 rpm, they’re making almost 1,300 lb.-ft. of torque. The acceleration in this boat is awesome. It just takes off. Most high-performance engines make good power, but they don’t make it as low as these 1350s do. Actually, these engines make this boat feel small and frisky.”

Like Woodruff, Scism pointed out that the boat cruises at a high speed while using very little throttle. He also played up the fact that the 9.0-liter engines run on 91-octane pump gas and Mercury offers a one-year warranty on them and the dry-sump M8 drives, which he called “unheard of in high-end performance engines.” 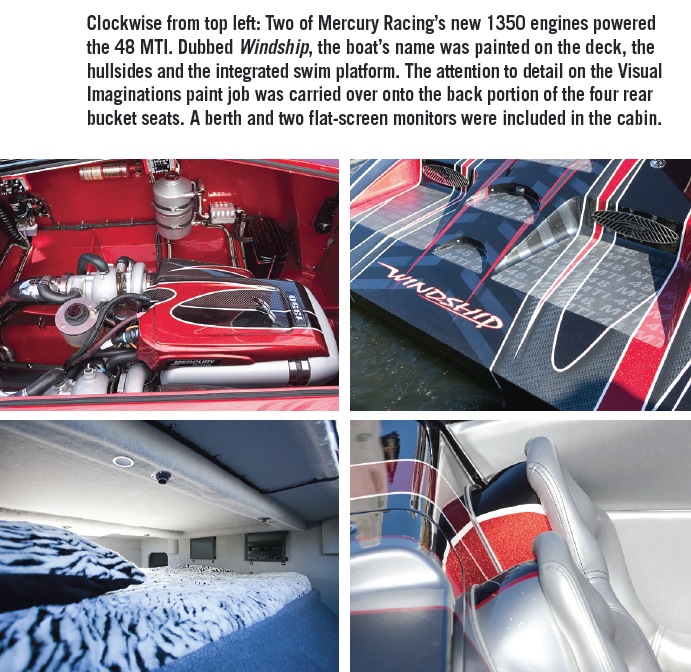 An owner of a Bell 206L LongRanger IV helicopter, which he flies two to three times a week, Woodruff has enjoyed his fair share of boats, including a Howard Arneson-built, turbine-powered 29-foot Sanger (he calls Arneson a friend and an inspiration) as well as a jet-powered, 20-foot Glastron (his first boat) that he bought from Evel Knievel.

“This thing is an ‘A’ all around—it’s absolutely beautiful,” Teague said. “Overall, it’s very sanitary.”

All of the wiring and hoses are secured neatly in the individual engine bays. The engine cowlings are painted to match the boat’s impressive paint job from Visual Imaginations and the drivelines are shielded by carbon-fiber covers.

The crew at MTI also did a fine job with the installation of all the controls and electronics in the six-person cockpit, which was a huge undertaking considering everything Woodruff dreamed up.

The boat is set up with the throttles and shifters between the two front bucket seats so it can be throttled from either side, and the tilt steering wheel is to starboard. Along with a SmartCraft Vessel View display on each end of the dash, the cockpit is equipped with six other monitors (not to mention two more in the cabin).

Centered in the dash is a 15-inch, touch-screen Garmin GPSMAP 5215 chart plotter, and to the left is an iPad—yes an in-dash iPad. Mounted in a chrome bezel, the iPad gives Woodruff an easy-to use entertainment center with access to all of his music and videos along with the countless applications when he is within cellular range or has Wi-Fi access at a marina.

For passengers in the four rear bucket seats, which feature high quality silver and gunmetal gray upholstery, MTI molded a video screen into the fiberglass backs of the two front seats and installed TV monitors in carbon-fiber bezels into the port- and starboard-side cabin access doors.

Woodruff asked MTI to add two pull-out storage compartments in the upholstered gunwales ahead of the rear seats, which turned out to be the perfect place to store the noise-canceling Bose headsets he uses for communication.

With his aviation background, Woodruff also wanted to add a Garmin 340 aviation panel, which allows him to communicate with aircraft. Now, through his headset, he can talk over the intercom, listen to the stereo, communicate ship to shore and converse with pilots (he has several friends who fly as well).

“This boat is as loaded up as any we’ve ever done,” Scism said. “It really came out cool.”

Along with heating and air conditioning, and a heart-thumping, 4,000-watt audio system, the boat includes a pretty functional cabin with a berth in the center over the tunnel, a toilet to starboard and a small seating area on each side. Along with the cockpit doors, the cabin can be accessed via two hatches in the deck.

With or without the new Mercury 1350s, Woodruff’s 48 MTI would be a showpiece. But because of the power plants, there’s no doubt the offshore catamaran—sitting on a tilt trailer with the bright lights shining on it—is going to get plenty of attention at the Miami International Boat Show in mid-February.

And after that, expect to find Woodruff and his boat at many of the Florida Powerboat Club events including the Miami Boat Show / Islamorada Poker Run right after the show.