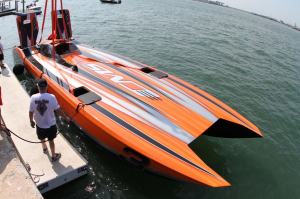 MTI will catch the attention of many at this year’s Super Boat International World Championships in Key West, Florida! The MTI line-up includes CMS (Superboat Unlimited), LoriBlu (Super Cat), and Gasse (Superboat Unlimited). The release below from Super Boat International showcases Team Gasse in the new 48′ MTI race boat and their excitement for the World Championships. Everyone looks forward to going to Key West and this year is no different…

Follow the teams live as they compete for top honors at the World Championships. Visit superboat.com to catch the non-stop action of your favorite team!

KEY WEST, Fla. (November 7, 2011) – The stage is set for the 31st Annual Key West World Championship event produced by Super Boat International. This year many international teams are entered and will join racers from around the United States to compete in this epic event.   Teams will race on three days beginning November 9th through 13th and work to acquire enough points to earn the coveted World Championship Title.

Key West is known for having the most exciting offshore powerboat racing conditions and, this year, teams should expect nothing different. Fans will be greeted by some of the world’s fastest boats along with experienced international teams from Europe, Italy, Ukraine and Australia to name a few. No other offshore racing event compares to the weeklong bash in Key West. 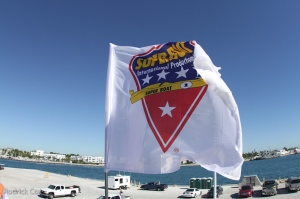 Super Boat International hosts the premiere event referred to by many as the Monte Carlo of Formula One racing.  Few motorsports events hold equal distinction such as Indianapolis 500 of Indycar, Daytona 500 of NASCAR and the Grand Prix De Monaco of F1, but for offshore powerboats, it is the World Championships of Super Boat International.

Promoter and founder of Super Boat International, John Carbonell coined the phrase, “To be the best… you have to win Key West,” and that still rings true. “We’ve had a great year for Super Boat racing and Key West is shaping up to be a very competitive event. We have teams coming from other countries to race and, like years past, teams know if you earn a World Title here… it means something. We strive to give the race teams the best course to race on and to give fans a memorable weeklong experience. With three days of racing, boat parades, festivities and block parties on Duval Street, there’s just not much more we can fit into a race-week.”

Teams prepare all year long to make the trip to Key West. Some arrive with fresh motors, while others arrive with as few hours as possible on their race engines, in hopes they survive the grueling event. One Super Boat competitor who has reaped much success over the years and appreciates what Key West has to offer is racing professional, Johnny Tomlinson. “I’ve been racing here since 1986 and been fortunate to win titles with many different teams. I am looking forward to having similar success with my new team [Gasse Racing].”

“There is so much effort that goes into getting here and racing well and that’s what makes {The Worlds} such an important event. I have a lot of customers who come to Key West to enjoy the weeklong event, so along with jumping in the boat and racing, I need to make sure everyone is taken care of…  it’s a little like pulling double duty. Key West is the best place for boat racing and Super Boat does a great job promoting it… everyone really loves coming here,” comments Tomlinson. 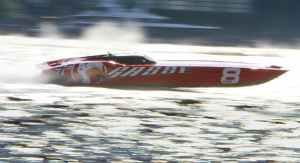 International competitor Tor Staubo, owner of Team Gasse is fired up to come to Key West again. “Last year I got a chance to race in Key West and this year, I am bringing my new 48’ MTI with the hope of having great success.  Hiring Johnny Tomlinson, whom I think is the best throttleman in the world… I couldn’t be any happier.”  Staubo, who comes from Oslo, Norway will be competing in the Super Boat Unlimited class against many formidable competitors.

Super Boat just completed their National Points season in Clearwater, Florida with teams in respective classes earning National Titles. For some of those teams who finished just outside the number one spot, Key West is the place to try it again and compete for a World Title. The Super Boat season runs November through October with the World Championships being the actual first event of the new season.  After Key West, teams take time out in December through March and start the National season opener in April.

Super Boat International is proud to announce Jacksonville, Florida has been added to the racing season and is scheduled for April 12th through 14th, 2012.

The Jacksonville Grand Prix will be the first of seven races for Super Boat’s National Points races.

Super Boat International’s 31st Annual Key West World Championships in Key West, Florida is November 6th –13th, 2011. There are various activities and boat races all week long starting with the SBI boat parade, Sunday the 6th at 4:00 p.m. EST. Racing will take place the following Wednesday, Friday and the final day, Sunday the 13th. The dry pits are in Truman Annex and race day viewing can be seen on the Outer Mole. Stop at the Superboat merchandise tent and pick up a souvenir T-shirt and 2011 Super Boat Key West Program. To get a complete schedule of the World Championships visit www.superboat.com/schedule.