For Offshore Powerboats, the World is a Stage 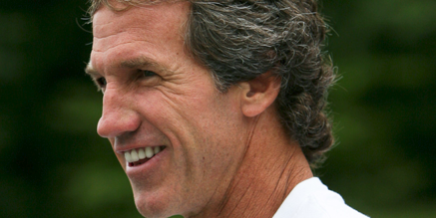 Johnny Tomlinson teamed up with Tor Staubo in a 48′ MTI race boat for the 2011 Super Boat Key West World Championship. Read about Tomlinson below and his experience and accomplishments racing offshore powerboats.

—
On both sides of the Atlantic, a world champion throttleman sees signs of renewed life. 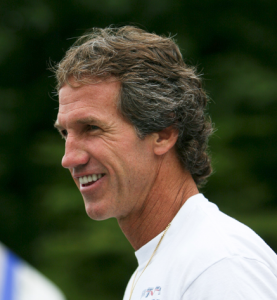 Two years ago when John Tomlinson, the renowned offshore racing world champion, took a mid-season job as the throttleman for the Abu Dhabi Class 1 race team that competes on the Union Internationale Motonautique circuit, he knew the gig was time-limited. Tomlinson, who earned Class 1 one world titles in 1996 and 1997—1996 being more impressive: he and his teammate went undefeated in Class 1, as well as in Open Class in the United States—knew that eventually the team would move one its own homegrown drivers into his slot.

Earlier this year, Tomlinson’s prediction came true and, for about a nanosecond, he was without an offshore racing ride. One quickly appeared in the form of Gasse, a 48-foot long Marine Technology, Inc, catamaran with owner Tor Staubo of Norway driving and Tomlinson on the sticks. By the time you read this, Tomlinson will have one Superboat Unlimited result or another under his belt from the 2011 Superboat World Championship in Key West, Fla.

As one of the few United States-based throttlemen—Tomlinson lives in Miami—to recently run on both the domestic and international offshore racing circuits, Tomlinson has a unique perspective on the state of the sport. And with 12 teams running UIM Class 1 and more than 60 boats registered for the SBI Worlds, he sees a season-ending upswing for both circuits in a year that was, to put it mildly, challenging.

“I know they have some of the same issues in Class 1 that we do over here—I’m sure there are accusations of people cheating, complaints about rule changes, and so on—but I’ve always kind of stayed out of it,” said Tomlinson. “Plus, for me, there’s a language barrier. I don’t always understand what everyone is saying. Steve Curtis (the United Kingdom-based throttleman for the Qatar Class 1 catamaran) translates some of it for me, but I’ve always tried to stay out of it.

“They [UIM Class 1] just got this new promoter and they’re starting this National Cup Series with a one-design class,” he added. “With all the venues they’re talking about in 2012, I’d say they’re on the upswing.”

Upward momentum hasn’t come easily for UIM Class 1. Like their domestic counterparts, the circuit’s organizers have had to deal with making Class 1 racing more “affordable”—a relative term to be sure in a sport where entire countries, the most notable being Dubai, sponsor teams. In UIM Class 1, that has translated to more restrictive operating ranges for the fleet’s standard Lamborghini V-12 engines. It also means more restrictive power-to-weight ratios created, in part, by expanded minimum boat lengths. (That means 40 feet.). Where once the Lamborghini powerplants were making close to 1,000 hp and dialed into four-speed shiftable transmissions, they’re now making around 850 hp in bigger boats—and the shiftable trannies are long gone.

“The idea behind all of the changes is for teams to be able to run one set of engines for an entire season, and reduce the cost,” he added. 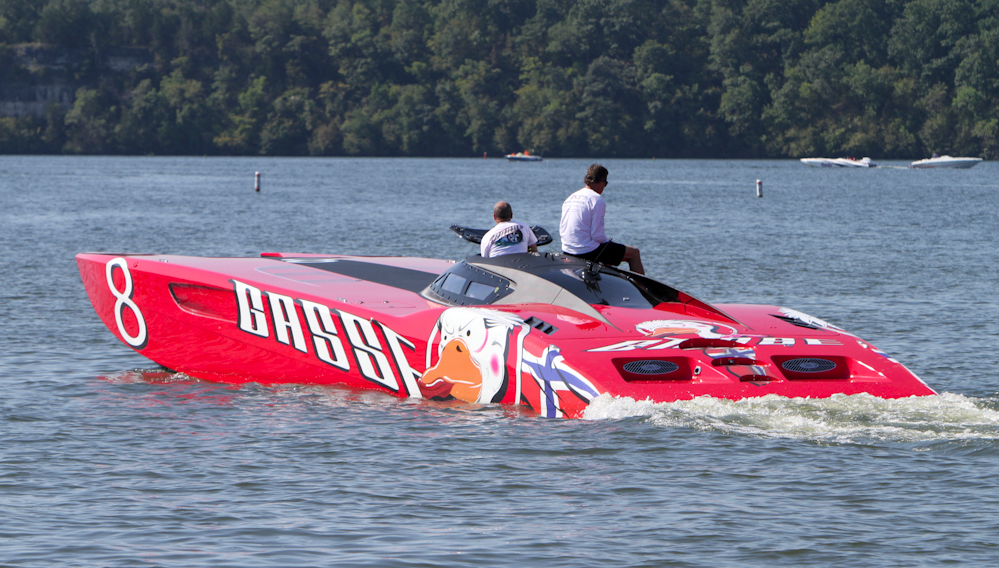 Cutting costs is essential for the survival of sport, particularly in a global economy that is sketchy at best. The Open class of domestic offshore powerboat racing, in which Tomlinson and Pharaon went undefeated on their way to a world title in 1996? Gone in the late 1990s—a victim of a two-team spending war that, in the end, neither team could afford.

Like the domestic offshore racing circuits, UIM Class 1 has gone to spectator-friendly, near-shore offshore racing courses. Each Class 1 event features two races, each with a required number of “long”—4.5-mile—and “short”—4-mile laps that competitors can complete in any order during the event.

“Strategically, you have to decide when to take your short and long laps,” Tomlinson explained. “You might be behind a lot of boats and decide to take a longer or shorter lap to get clear of them, depending your position on the course.”

Unlike the domestic offshore racing circuits, the Class 1 boats do not share their courses simultaneously with other classes.

“You are running with ten to twelve boats in the class, and that’s it,” said Tomlinson. “The course is set up before the event, and they have designated practice times where you can go out, run a lap and come back to the crane and make changes and go right back out, just as long as you get it done during your designated practice time.

“You get a lot of testing time over there, and that’s a good thing because you need it,” he added. “You have to be on your game over there, for sure. Everybody tests, everybody practices and everybody races hard.”

But despite his positive experiences in UIM Class 1, despite the myriad of classes on the course at once and what can seem like endless politics in a language he can understand in domestic offshore racing, Tomlinson said he always will have a soft spot in his heart for racing on the current 6-mile course in Key West. His first race there was in 1986.

Since then, Tomlinson has seen the course contract and move closer to shore, which means rough water has become less of a setup issue and test of team skill than it used to be. Still, Tomlinson sees Key West as perhaps the premiere venue in the world of offshore racing, and one that attracts an international fleet. This year, there were entrants from several countries including Norway, Sweden, the United Kingdom and even Australia.

“In some ways, the flat water racing makes setup a lot more challenging, because a setup difference can mean one-half of a mile per hour, and over a 43-mile race that makes a huge difference,” said Tomlinson.

With 60-plus boats registered the day before the first race—the SBI Key West Worlds have a three-race, Wednesday, Friday and Sunday format—and five entries in his Superboat Unlimited class, Tomlinson said he was pleased with the turn-out. He admires the professionalism and organization found in UIM Class 1, but does not discount domestic offshore powerboat racing, especially at the final event of the year.

“Key West is a great spectator race,” said Tomlinson. “Even people who don’t know anything about racing know about Key West. It’s always the most competitive race of the year. It’s always special.”