New 446 MTI Being Delivered to Mario Williams in Texas 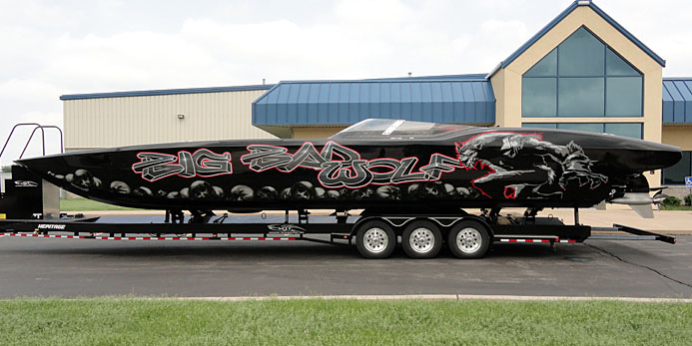 Speed On The Water recently published this article on the new Big Bad Wolf MTI catamaran, built for NFL defensive end Mario Williams at the Texas Outlaw Challenge. Check out the article in full here, or read an excerpt below.

If you’re going to be in Texas next week for the sixth annual Texas Outlaw Challenge, it will be hard to miss the new black 446 catamaran from Marine Technology Inc., the company’s second 446, which is 6 inches wider than the standard 10-foot, 6-inch MTI 44.

According to Tom Stuart, Sales and Client Relations for MTI, the Big Bad Wolf-themed boat will be delivered next week to 28-year-old NFL defensive end Mario Williams, who plays for the Buffalo Bills. Williams, who played college football at North Carolina State, was the overall No. 1 pick of the 2006 NFL Draft by the Houston Texans.

MTI is planning an invitation-only unveiling party for Williams and his new boat, which is powered by twin Mercury Racing 1350 engines. Speedonthewater.com, which will be attending the Texas Outlaw Challenge, has been invited to the party so look for additional coverage on the new boat next week.