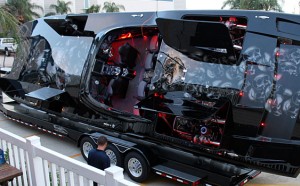 Check out this awesome coverage of the new Big Bad Wolf MTI by Offshore Only!

Last week I learned about the latest catamaran from Marine Technology Inc. (MTI) that was recently delivered to Mario Williams, defensive tackle for the Buffalo Bills. Williams, who in 2012 signed the most lucrative contract ever for an NFL defensive player, ordered the 446 catamaran almost a year ago from Bullock Marine in Seabrook, Texas.

So, on the same day I rolled into the Houston area for the sixth annual Texas Outlaw Challenge with my speedonthewater.com trailer in tow, I was invited to attend an MTI party to celebrate Williams’ new boat at Sam’s Boat, a lively waterside seafood restaurant and bar in Seabrook that is part of the Endeavour Marina complex on Texas’ Clear Lake. The all-black boat, which has a Big Bad Wolf theme in homage to the Wolfpack mascot at North Carolina State where Williams was a student athlete before being drafted No. 1 overall by the Houston Texans in 2006, was on display for partygoers to examine more closely from the patio of Sam’s Boat.

“I’ve been so anxious to finally see the boat so once I got a chance to look it over and ride in it, I was overly excited,” said Williams, who grew up in and around the water in North Carolina fishing with his grandfather but has never owned a performance boat. “I think the boat looks amazing and it rides even better. At the end of the day, I’m glad I chose
an MTI.”

Click here to read more from the original article, as published by Offshore Only.