After his 186 mph pass last year, Bull said coolly, “I drove the boat to the races this morning and I am going to do some pleasure boating in it this afternoon.” He has a home on the Lake of the Ozarks and loves the fact that the Lake does not have a speed limit. For fun, his wife Debby likes to drive 150 mph on the way to breakfast in the morning.

Winning the Top Gun Shootout trophy is nothing new to Bull and Scism.

Bull has been racing boats for more than 20 years and has competed in seven Shootout events. He has won every national or world title in every class, except outboard catamaran. He has set official world speed records in most of the classes as well and he still holds a couple of Kilo records. 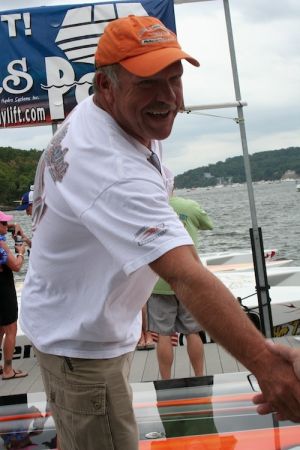 Scism raced in the first Shootout ever, in 1989, and he has won his class in the Shootout multiple times, including first overall with Bob Bull, Dave Scott, Reggie Fountain, Jeff Harris and Mike Defrees.

When Bull first started racing in Florida, the fastest boat time in the world was somewhere between 130–140 mph. Today pleasure boats are running up to 190 mph; the fastest ones can break 200. Currently Dave Scott has the “official” Kilo record at 198 mph, but Bull and Scism are in the process of building a 52-foot Cat with the goal of blowing Scott’s record out of the water. They hope to hit the 200 mph mark. The pair is also planning some point-to-point endurance runs. According to Bull, unofficially, they have already seen what 200 mph looks like in the 48 ft. MTI. But that number could become official this fall, as the team is planning a record run in late November in the 52-foot Cat.

“The records are always changing. We always have a target to shoot for, and then we try to break it to the next level,” Scism said. Both men say they would like to have the ability to clock official speed records at the Shootout. To make that happen, a sanctioning body such as Super Boat International or American Power Boat Association would have to be involved. An area of the water would be shut down and the boats would run a kilometer both ways, with their average speed being recorded.

Team MTI/CMS to showcase three boats at the 2013 Shootout

The men are not gunning for the top speed award at the Shootout because their Cat is set up more for offshore racing, as opposed to a one-mile, straightaway quick-run. “These engines are endurance engines and are top-end performers, not out-of-the-hole fast,” Bull said. The engines have to run wide open for one hour to achieve peak performance, unlike the 5,000 horsepower engines of the turbine boats that are only good for about 20 minutes.

“The MTIs are really fast,” Scism said. “The engine’s center of gravity is further forward so this costs us in quick acceleration runs, but it takes more than one mile to get to optimum performance. Weight and balance is set up for racing in high winds and offshore waves, so the nose doesn’t fly up. We’ll be satisfied to win our class, and have some fun at the Shootout.”