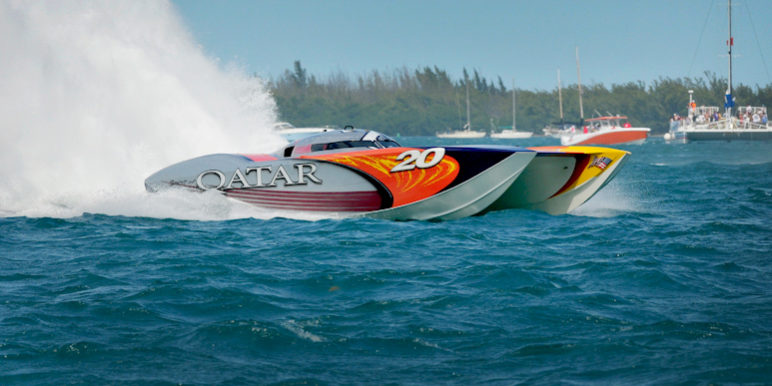 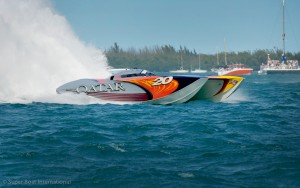 The future of offshore racing is in good hands thanks to some talented second-generation competitors from some of the best-known families in the sport.

The best performance on Sunday was turned in by the Spirit of Qatar Superboat entry, which was driven by Ali Al-Neama and throttled by second-generation throttleman Billy Moore, son of the inventor of the throttleman position, the legendary Bobby Moore. Fuel starvation problems plagued Moore and Al-Neama’s 42′ MTI on Wednesday and Friday, but once Moore realized that he had full power on Sunday, he put it to good work.

First the 38-year-old Moore over took the Stihl team for second place and then the chase was on as he tracked down Billy Mauff and Jay Mueller in the Skater 40, WHM Motorsports, which looked like an aircraft carrier compared to the rest of the boats in the class. Eventually, with a few laps to go and WHM’s engines banging hard on the rev limiters the two boats charged into the harbor turn side-by-side. Moore and Al-Neama had the inside but WHM had a couple of boat lengths and tried to slam shut the door.

How Moore and Al-Neama made their move stick when it looked as if they had no room at all remains a mystery but as the boats accelerated out of the turn, it was clear that Qatar 20 had a distinct advantage. Moore and Al-Neama pulled away and scored an impressive win for Sheikh Hassan’s team. They wound up third in the overall standings behind WHM and Stihl, respectively.