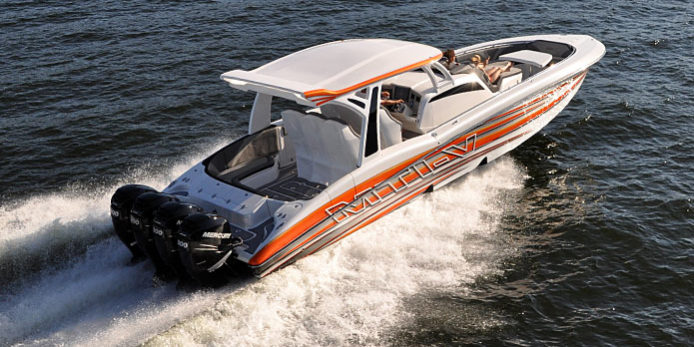 This year, you can find Marine Technology Inc at our annual location, booth B-31, in the north-east corner of the Miami Beach Convention Center. Though the location may be the same as last year… the lineup we have planned is sure to bring a few new surprises to the table.

We will have four boats on display at the booth—True to the trend of 2013, MTI’s big cats rule.  The staff at MTI had to be very creative just to fit these large boats in the booth this year. This creativity led to what will be a show—stopping display of large MTIs. Two ’52s will be joined by a ’48, and the hard to miss MTI-V 42 center console!

The bright silver MTI-V 42 will display a new “SS” interior package and a different seating option than prior MTI-V 42s. Quad Mercury 300 Verado outboards grace the transom of the MTI-V, and Garmins new GMM 19″ flat panel/8530 Black Box system and 15″ 8215MFD lead the way. This high performance center console blends the amenities of a full cabin, seating for more than the entire family, performance, and unique styling…  Our intention was to be different, and we feel we succeeded. Come see for yourself.

We will have another MTI-V 42 in the water at Sea Isle Marina for display and sea trials. Those considering a purchase of a performance center console will definitely want to experience the MTI-V—It will make you a believer. The boat will be located in Slip 111 on Pier #1. Sea trials will be booked through the staff in our Booth B-31 in the Convention Center.

Follow us on Facebook where we will be positing pictures of the booth as it comes together, and photos of the action during the show.

Check out the coverage from Speed On The Water, below, for more details on what Marine Technology Inc has in store for the Miami Boat Show, or click here to read the article in full.

Besides sharing that the company will have a pair of V42 center console models on display at the Miami International Boat Show, which starts two weeks from today, Tom Stuart, director of sales and marketing for Marine Technology Inc. (MTI), would only say that MTI was going big with some new body styles on its larger catamarans and doing everything it can to maximize its floor space inside the convention center.

There are rumors no doubt of what boats will be there; heck, I reported back in November that John Rosatti’s new boat—the first non-canopied 52-footer—was expected to be unveiled at the show. But Gallagher isn’t willing to confirm anything as none of the boats are “boat show ready” with move-in day just 10 days away.