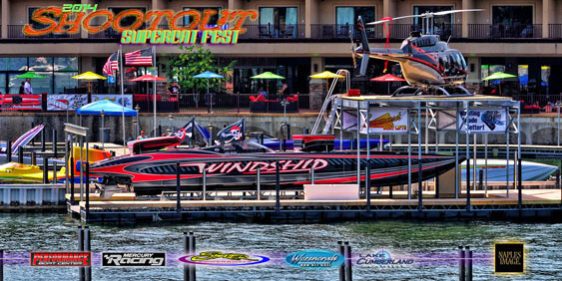 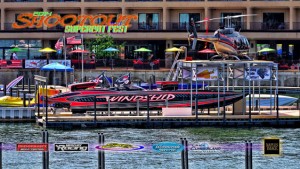 For many reasons, 2014 will go down in history as one of the most unforgettable years of the Lake of the Ozarks Shootout. From the tragedy and triumph in the top-speed event to the parties at Captain Ron’s—the location of the Shootout—and the new groundbreaking Performance Boat Centerlocation at Redhead Yacht Club, the 26th annual Shootout surely will be etched into my memory forever…

“Obviously John Woodruff topped the show this year,” Heathman continued, referring to the owner of Windship—a 48-foot MTI—who had his helicopter “docked” next to his boat. “I’ve got to hand it to Shane [Sherman] and the guys at Summerset Boat Lifts who provided a cat lift last year so our participants had a place to change props and anything else. This year we asked them if they could build a place for John to land his helicopter. All we could do was ask, right? They pulled it off and we handled the other logistics, and next thing you know there was a helicopter at the docks. John told me he was hesitant the first time he landed because the platform felt like it was moving—and then he realized it should be because it was on water.”

Woodruff thoroughly enjoyed bringing his boat to Lake of the Ozarks for the first time.

“Oh man did we have a lot of fun,” said Woodruff, who enjoyed the company of his girlfriend, Nancy, and her three friends, who all had matching bathing suits for three different days. “Shane and the guys at Summerset Boat Lifts wanted to make a statement and they did just that. To be able to land and walk right up to our rooms, which were really nice and looked down at the marina, was a complete privilege.”

Click Here to view a wicked-awesome video of
the notorious CMS MTI Catamaran from the Lake of the Ozarks Shootout!