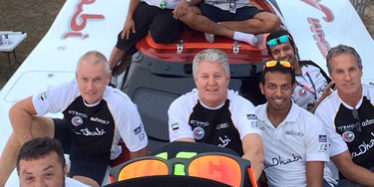 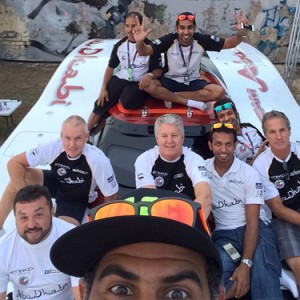 Even a casual offshore racing fan would never think of calling Gary Ballough a “rookie.” After all, the Stock-class veteran throttleman has 12 National Championships and 12 World Championships—not to mention 107 wins in a career that has spanned most of his adult life—under his belt. In 2012, Ballough and teammate Omar Danial took second place in the Union Internationale Motonautique’s X-Cat class, the international equivalent of Stock class in the United States.

And yet last weekend*, Ballough was every bit the wide-eyed rookie. That’s because he got the nod to share the cockpit of the Abu Dhabi team’s 48-foot Marine Technology, Inc., catamaran with throttleman Johnny Tomlinson for the UIM Class 1 races on Saturday and Sunday in Terracina, Italy.

“It was just unbelievable,” said Ballough, who remains in a moderate to heavy state of euphoria since he returned home yesterday. “First of all, I’ve never driven one of those boats. My biggest concern was not disappointing the Abu Dhabi team or [MTI company owner] Randy Scism or Johnny—people I really look up to. I didn’t know if was I capable. They were nice enough to ease me into it a bit.”