Barrie and Orillia Natives Team Up Unexpectedly In MTI Catamaran 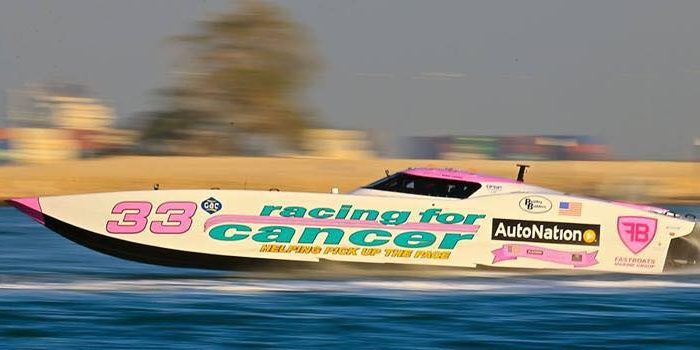 Hitting speeds of more than 132 miles per hour while in the cockpit of a sleek, powerful MTI Catamaran, Orillia native Jay Cooke piloted Racing for Cancer to the checkered flag at an international powerboat race in Qatar earlier this month.

It would be an incredible feat for a seasoned driver. However, Cooke had never been at the helm of such a vessel before. He was tapped by boat owner and throttle-man Randy Sweers to serve as a last-minute replacement after the Barrie native found himself in need of a partner in the cockpit.

“I’ve known Randy through boating and socially for a number of years and he invited me and my wife to go with him to this big race in Qatar,” Cooke said. “It was, for us, an opportunity to experience a different culture and see a unique part of the world. I never dreamed that I would be driving this boat.” However, just before embarking on the trip, Sweers asked Cooke, who has often raced his power boat in poker runs, to complete the paperwork necessary to obtain his racing licence – a necessary first step to getting an international permit when he got to Qatar. 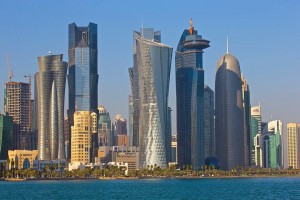 “Randy had several options for drivers who had experience and who had driven boats like this before, but he invited me to go out with him and give it a try,” Cooke said. “I had never done anything like this before.” It was a dramatic difference from his poker-run experience. While those events are built around power and speed, participants often have the stereo blasting, go at their own pace, slow down around other boaters and enjoy the social atmosphere that is part of the event culture.

In Qatar, in an event that was essentially part of a big-money professional circuit, it was a race like no other, where boaters had to navigate tight corners at high speeds, jockey for position and try to pull away on straightaways. And while Cooke was at the wheel, Sweers was on the throttle. The two had to and work together in near-perfect unison to push the boat to its limit and to out-race the other vessels.

“We were in constant communication.”