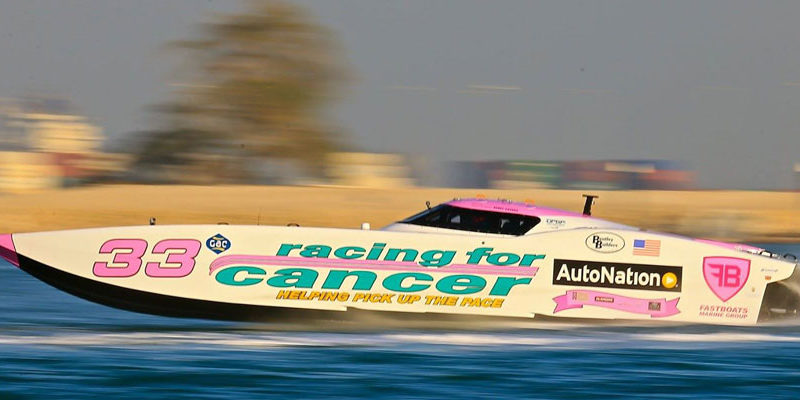 Over the last week or so, powerboat race teams from around the world have gathered to compete in the Qatar Cup. Two teams in particular, who topped the leader-board for the Supercat Class, took to the water in MTI Catamarans.

Congratulations to all competitors in the OPGP. Sheikh Hassan and the OPGP crew did a fantastic job organizing this inaugural event, and we wish them the best in organizing the 2016 event.

Check out the excerpts below, covering the highlights of the Qatar Cup, as provided by SpeedontheWater.com. 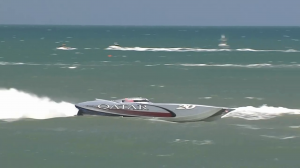 It took 11 of 14 laps for Racing For Cancer to overtake Pro Floors Racing, but once throttleman Randy Sweers and Jay Cooke grabbed the lead from the New Zealand-based Pro Floors cockpit duo of throttleman Chris Hanley and driver Wayne Valder they stretched their lead and never looked back. But the final drama of the Qatar Cup happened on the final lap, when—battling for third place with Spirit of Qatar 20—Steve Curtis and Joe Sgro appeared to barrel-roll (but may have spun, neither Sgro nor Curtis could recall rolling over) Sgro’s Outerlimits 43 V-bottom. Curtis reportedly exited the boat under his own power. Sgro, however, was extracted from the boat (reportedly conscious) and is currently en route to a local hospital for examination.

Official results for the Supercat class put Spirit of Qatar 20 in first place overall, Racing For Cancer in second and Pro Floors Racing in third.

Click Here To Read More from Speed on the Water

Racing For Cancer Honored For Efforts In Qatar

Randy Sweers, the owner and throttleman of the Racing For Cancer Marine Technology, Inc., Ilmor Marine-engine-powered catamaran was honored yesterday for his team’s ongoing efforts in promoting cancer awareness and early detection by Sheikh Dr. Khalid bin Jabor Al-Thani. The older brother of Sheikh Hassan bin Jabor Al-Thani, the head of the Qatar Marine Sports Federation and the principal architect of the Qatar Cup, Dr. Kahlid bin Jabor Al-Thani was the Minister of Health for Qatar and has long been involved cancer research and fundraising.

“We met in the wet pit area at the boat at 9 a.m. yesterday,” said Sweers, whose wife, Kim, was diagnosed with cancer in 2014. “We discussed the important of early detection—the award was a small token of his appreciation for what we represent.”

Click Here To Read More from Speed on the Water