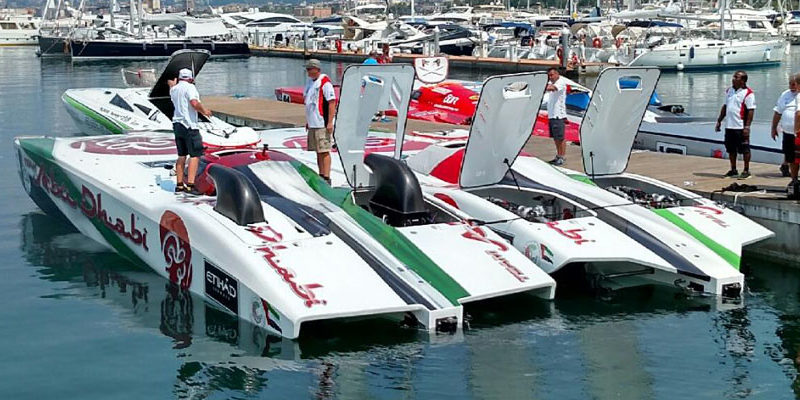 Team Abu Dhabi exuded confidence from the moment the team arrived in Salerno, Italy for the Internationale Motonautique Class 1 World Powerboat Championship. Showcasing not one, but two powerboats for the upcoming race, Team Abu Dhabi’s muscle was apparent way before the competition even began to heat up.

The team showcased a brand new 48′ MTI catamaran, powered by twin 850-hp Mercury Racing engines, in this year’s event as well as their older MTI catamaran, outfitted with Lamborghini SCAM engines for this season.

With American favorites Gary Ballough and John Tomlinson by their side, Team Abu Dhabi was able to whisk the 1st place title out of the hands of their competitors using the team’s brand new MTI.

The American duo, who also won the opening race on Wednesday, concluded the Grand Prix of Salerno in the first round of the 2015 Class 1 season, at the top of the championship standings with a maximum 40 points.

The second Team Abu Dhabi boat featuring the Emirati pairing of Majid Al-Mansoori and Rashid Al-Tayer, who finished second on Wednesday and fourth on Thursday, is tied for Second Place with the Fendi Racing/T-Bone Station team in the standings with 24 points.

MTI would like to congratulate Team Abu Dhabi on their success! We also wish the team the best in their future endeavors.

All photos courtesy of John Tomlinson.