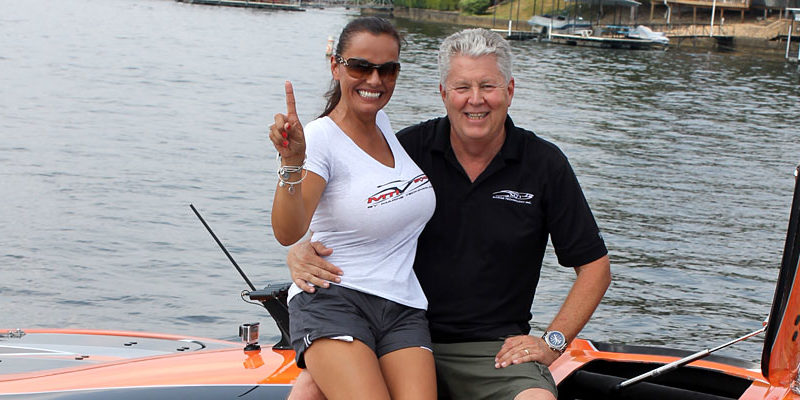 Photo Courtesy of Jason Johnson/Speed on the Water Magazine

Check out this awesome article by Jason Johnson of Speed on the Water Magazine, featuring Debbie Bull and Randy Scism’s 180MPH run in the fan favorite CMS 52′ MTI Catamaran at the 2015 Lake of the Ozarks Shootout!

Sitting aboard a 42-foot center console from MTI, you could tell that Bob Bull was nervous watching his wife, Debbie, run his 52-foot MTI catamaran powered by twin Mercury Racing alongside throttleman Randy Scism down the one-mile course at the Lake of the Ozarks Shootout in Central Missouri.

And it wasn’t because he was nervous something would go wrong—it was because he was nervous she might beat the 183-mph run he accomplished a half hour before with Scism. She didn’t pull it off, but she did run 180 mph, which is by far the fastest speed a woman has ever run in the 27 years of the Shootout. The previous mark was held by Lisa Matthews, who ran 156 mph with Randy Kent 10 years ago. 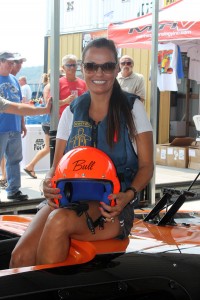 Photo Courtesy of Jason Johnson/Speed on the Water Magazine

But it was Debbie Bull’s run that will be the talk of the Shootout for years to come.

“We realized I needed to beat 156 mph, which Lisa ran with Randy when the event was at Shooters 21 so we decided to give it a go,” Debbie said moments after getting out of the canopied 52-footer and switching spots with her husband who was headed back out for the exhibition race with the stunt plane. “My adrenaline is racing after getting out of the boat. The acceleration was unbelievable—the boat just picked right up and it felt like we were flying on the water.

“Of course as me being a novice at those speeds, Randy had to educate me a little bit about what to expect,” she continued, adding that the fastest she’d ever driven a boat with her husband was 143 mph in their pleasure boat. “My intention was to beat my husband’s speed, but I’ll take the 180.”

When asked if she’d do it again, she quickly replied, “Sure, why not?”