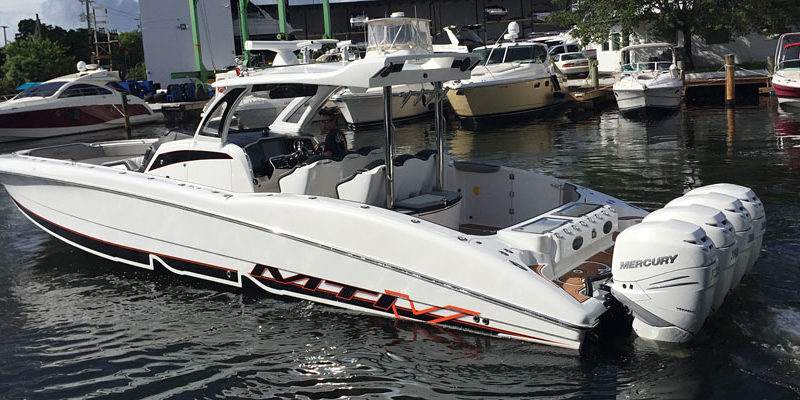 Marine Technology Inc. is preparing for a busy month full of upcoming events and new center console and catamaran model releases! Read below for more information on MTI’s upcoming events!

With production at full tilt and deliveries coming out of the Wentzville, Mo., shop at a frequent pace, the crew at MTI appears to have its hands full between the new catamaran and center console builds coupled with several notable events on the horizon. And while he and others at MTI are expecting to lose quite a bit of sleep over the next few weeks between the Fort Lauderdale International Boat Show (Nov. 5-9) and Key West the following week, Sales and Client Relations Tom Stuart said this is a very exciting time for the company.

“We are going to have a pair of MTI-V 42 models at the Fort Lauderdale show, including the latest XSF sport fishing model,” Gallagher said. “The XSF made its debut at the Miami International Boat Show in February and has been well received. The model blends some serious fishing features with the detail and appointments of our successful sport model. We have the ability to remove the forward and rear seating to greatly expand the fishing floor plan. Other fishing “must haves” such as dual 50-gallon livewells, a smaller, narrower hard top, expanded floor storage and a rear-facing seat that doubles as a fighting chair are all present. Make sure to stop by the H/I Dock 25-26 at the Bahia Mar/Hall of Fame/Las Olas Marina Show to see what boats we’re bringing to the show!

“The MTI-V 42 sport model on display will leave nothing missing from your wish list,” Gallagher continued. “We’ll also have information on our new 34-foot catamaran and 57-foot MTI-V, which are both in progress to make their debuts in February at the Miami show.”

Gallagher said he’ll be manning the two MTI spaces at the Fort Lauderdale show’s H/I docks while owner and founder Randy Scism will be in Abu Dhabi with the MTI race crew and the Abu Dhabi International Marine Sports Club, which will field two boats in the Class One World Championship race.

“Randy and Johnny Tomlinson will make flights back to the U.S. just in time to slip into the CMS boats for the world championships in Key West,” Gallagher said. “We’ll be moving out of the show quickly so we can attend the Florida Powerboat Club’s Key West Poker Run with many customers. We actually relocated our show booth to allow us sooner to be ready for the Wednesday poker run departure.

“We will be completing deliveries on several boats just in time for the new owners to debut their boats at the event,” he continued. “I don’t want to let all the cats out of the bag and tell you who has new boats coming, but we have a few surprises.”

Gallagher said Rusty Rahm of Wake Effects, MTI’s newest dealer in Osage Beach, Mo., is planning to participate in the poker run in his canopied 52-foot catamaran that made its debut at the Lake of the Ozarks Shootout in August.

While MTI’s poker run fleet is sure to catch plenty of looks while in Key West, Gallagher added that there will be a nice fleet of MTI catamarans competing in the Super Boat International Offshore Key West Worlds at the same time throughout the week.

This article originally posted on Speedonthewater.com.