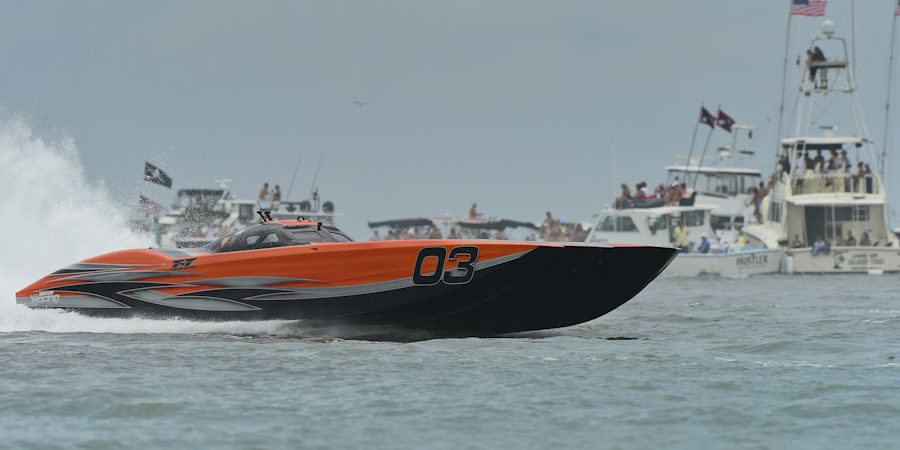 I couldn’t wait to get in this morning to make some calls and write this post to celebrate Team CMS’s Superboat Unlimited Offshore World Championship. My first conversation was with John Tomlinson – throttleman in CMS #03, a Mercury Racing 1650 powered 48-foot MTI cat with veteran Jeff Harris behind the wheel.

“The goal all along was to finish 1-2. Jeff and I placed second on Wednesday (race 1).  We were taken out early Friday (day 2) when Team CRC rode up on some rooster tails and ended up hitting us in turn 1, resulting with a gaping hole on the port side of the engine compartment,” Johnny said.

“On Sunday, Jeff and I were third going into the first turn. Bob (Bull) and Randy (Scism) (CMS #3) were on the inside and GEICO was on the outside. We were pinched in the middle going through the turn. Once we came out into the rough – Jeff punched and we lever looked back,” said Johnny.

“MTI and Mercury Racing make a winning combination,” were the first words from Marine Technology, Inc., owner/CEO Randy Scism when we spoke this morning. “Triple Crown champs; Superboat Unlimited National Championship, Superboat Unlimited World Championship and Class 1 World Championship. It’s been an awesome couple of weeks,” Randy expounded. This may be the first time in history Mercury Racing has captured the triple crown.

“We had a great year,” said Team CMS #03 driver Jeff Harris. “We ran every SBI race and the Lake Race at LOTO as well. Throughout the year, the only races Johnny and I didn’t win were the ones Bob and Randy won,” Jeff said. “The winning boats led every lap. A large part of that is the engines are so darn reliable – lap after lap – race after race. There simply are no issues and thus why the Mercury QC4vs are so dominant,” Jeff concluded.

This article is originally posted to MercuryRacing.com.