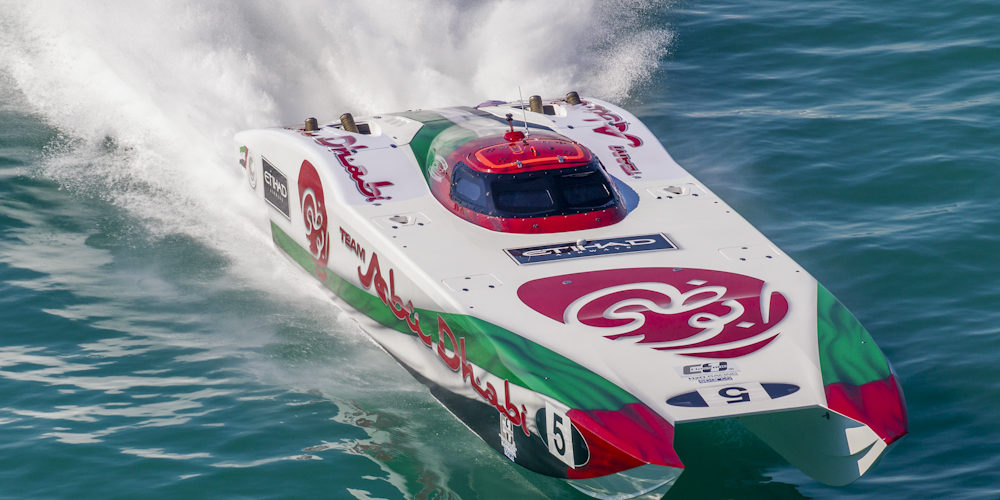 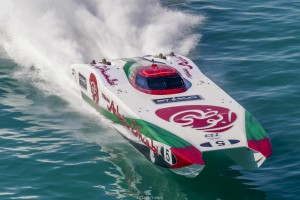 Check out this stellar coverage by Speed on the Water Magazine, featuring Team Abu Dhabi!

According to a press release from the Abu Dhabi International Marine Sports Club (ADIMSC), Team Abu Dhabi stands on the verge of creating history in a sport that it entered for the first time as a host venue in 2009. The team, which fielded two boats in the 2015 Union Internationale Motonautique Class 1 World Powerboat Championship, holds a 16-point lead heading into the final two races of the Class 1 season at this week’s Abu Dhabi Grand Prix (Nov. 4-6).

A victory for the Team Abu Dhabi 6 crew of John Tomlinson and Gary Ballough—both from the United States—in the opening sprint on Thursday afternoon would be sufficient to clinch the title, regardless of the outcome of the second race on Friday.

This summer Tomlinson and Ballough claimed a pair of stunning victories at the Salerno races in Italy in their American-built MTI catamaran. The teammates arrive in Abu Dhabi with a 40-point championship tally while their teammates, Majid Al-Mansoori and Rashid Al-Tayer, are tied for second with T-Bone Station at 24 points and the defending champions—Victory Team—are in fourth place with 22 points. With 20 points at stake for the win and 15 for second, Tomlinson and Ballough seem have the outcome of the series firmly in their hands. 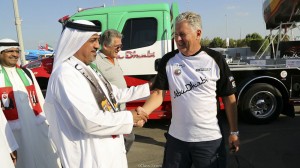 Al-Mansoori and Al-Tayer finished second and third in the first two races in Italy and could preventing their teammates from taking the title if they can win the opening race outright.

“We have two boats out on the water—the strong lineup gives us a superb opportunity to go for gold and the world title this season on our home water,” said Salem Al-Rumaithi, assistant director general of the ADIMSC. “This is one of the most important titles in powerboat racing and it would be the first time in team history that we have achieved it.

“The fact we have two races running for Class 1 and V1 meant that the organizing committee had to revise the path around Lulu Island, as it passed by the Corniche beforehand,” he added. “The number of boats means it is more appropriate and convenient to return to the older course. We also have a backup plan if the weather conditions deteriorate.”

Team Abu Dhabi is supported by Etihad Airways and runs under the patronage of Sheikh Dr. Sultan Bin Khalifa Al-Nahyan, advisor to the Head of State and chairman of the board of directors of the ADIMSC.

Boats will be permitted on the course for an official practice session on Wednesday afternoon, before the official race one pole position session for the PP Trophy gets underway on Thursday morning. The first race of the Abu Dhabi Grand Prix began Thursday afternoon.

Further free practice is scheduled on Friday morning and the second race at the Abu Dhabi Grand Prix draws a curtain on the year’s Class 1 racing and H2O Racing’s tenure as the series promoter in the afternoon.