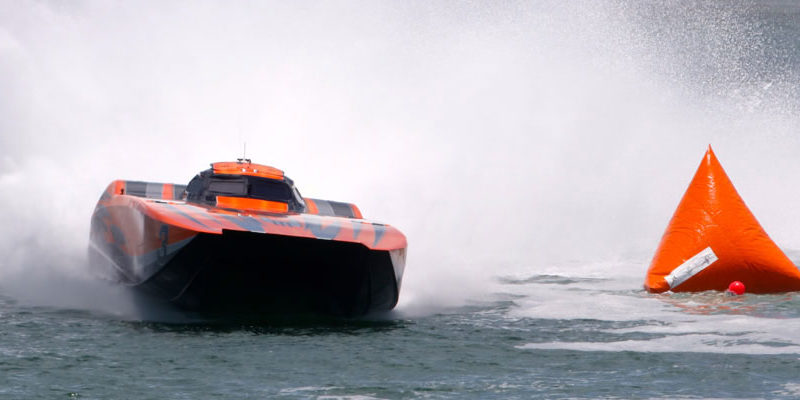 Check out this awesome recap of the 9th Annual Marathon Super Boat Grand Prix by SpeedontheWater.com.

These catamarans gave their competition a run for their money. Check out highlights from the race and what the drivers had to say, below.

Sunday’s performances of three Superboat Unlimited-class teams during the Super Boat International 9th Annual Marathon Grand Prix in the Florida Keys surely left their competitors wondering if there’s something special in the water at the Lake of the Ozarks. The popular Central Missouri aquatic playground is “home water” to Marine Technology, Inc., which saw Wake Effects, CMS and CRC/Sunlight Supply—all MTI catamarans powered by Mercury Racing 1650 engines—finish first, second and third respectively in the Unlimited class.

In the 48-foot Wake Effects MTI, which ran last season in the CMS stable and took the lead Sunday on the last lap, rookie Rusty Rahm (whose Wake Effects boat dealership handles MTI in the Lake of the Ozarks area) did the driving while veteran offshore racer Jeff Harris took the throttles. CMS team owner Bob Bull drove and Randy Scism, the owner and founder of MTI in Wentzville, Mo., handled throttles in the 52-foot CMS catamaran. Taking third-place was yet another 48-MTI, CRC/Sunlight Supply catamaran throttled by Mike Defrees and driven—at least for the Marathon race—by Gary Ballough. (Defrees purchased the 48-footer, which formerly ran as the Gasse boat, in late 2015.)

“We got one, two and three,” said Scism. “Bob did a great job. Jeff and Rusty got faster and faster as they gained seat time together. Mike and Gary had a Guardian (protective engine mode) issue problem but were running hard.

“It just doesn’t get any better than today,” he continued. “Rusty and Jeff are leading in points for the National Championship. It’s a great start of the season for Wake Effects.”

This article was originially posted on SpeedontheWater.com.