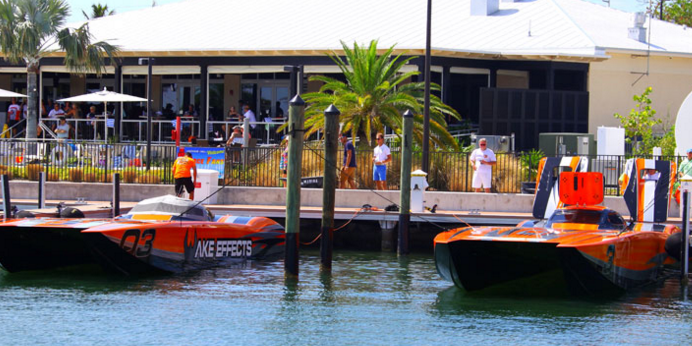 The Wake Effects MTI Catamaran will be just one of the six Superboat Unlimited-class teams on the water for this weekend’s Super Boat National Championships in Clearwater, Fla.

There are 28 teams signed up on the Superboat Unlimited-class teams entry list as of September 19, 2016. Several MTI catamarans will be making a splash in Clearwater Florida, including 03 Wake Effects with driver Rusty Rahm, 3 CMS with driver Bob Bull, 7 Team CRC – Sunlight Supply with driver Gary Ballough, and 33 Sailor Jerry/AutoNation with driver Todd Beckman.

With three first-place finishes in four races so far this season, the points-leading Wake Effects team has to be the odds-on the favorite heading into Clearwater. Behind the wheel in his rookie season, Rusty Rham has proved to be a quick study alongside veteran throttleman Jeff Harris in the team’s 48-foot MTI catamaran.

Also off the course since Marathon, the Team CRC—Sunlight Supply pairing of throttleman Mike DeFrees and driver Gary Ballough are heading to Clearwater with their 48-foot MTI—the former Gasse raceboat—powered by Mercury Racing 1650 engines. The team comes into Clearwater with second and third-place finishes in Cocoa Beach and Marathon. Also set to compete are the Superboat Unlimited-class World Champions throttleman Randy Scism and driver Bob Bull in CMS, a 52-foot MTI catamaran powered by Mercury Racing 1650 engines.