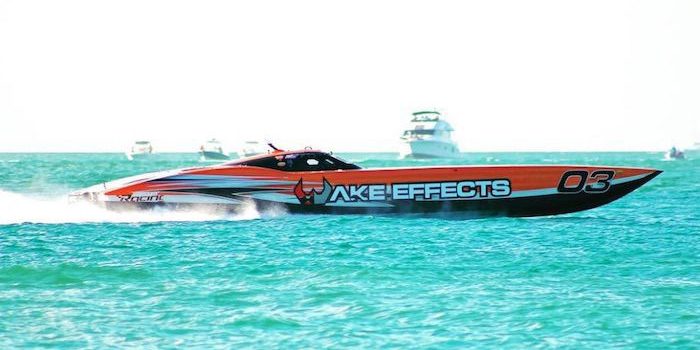 Check out the interview, below, from Janet Dabbs of Lake Expo, featuring a Key West Worlds recap with Team Wake Effects!

Rusty Rahm and Jeff Harris, of Team Wake Effects 03, just pulled off something few powerboat racers have ever done. They won the 2016 “Triple Crown” of boat races.

The Lake of the Ozarks powerboat racing team won big in the 2016 35th Annual Super Boat International Offshore World Championships in Key West, Fla., on Sunday, Nov. 13. With Rahm driving and Harris throttling, the team took the first place trophy in the 2016 Superboat International Offshore World Championships Unlimited Class.Forty-three boats competed in the three-day race. That win landed Team Wake Effects 03 the coveted Triple Crown in the Superboat Unlimited Class, since they also won the National Championship and the Florida Circuit this year.

But the team’s path to victory in Key West was not perfectly smooth. The 48 ft. MTI, with twin 1650 hp Mercury engines, experienced mechanical problems on day one of the three-day race. “That dropped us back to sixth place,” Wake Effects driver Rusty Rahm said. “Coming out of your first race in sixth place makes it tough to be in good spirits.”
The team upped the ante a bit by coming in second place on Friday. “We had to have a first place on Sunday if we were going to have a shot,” Rusty said. Their shot came in the form of bad luck and a faulty sensor for teammates Bob Bull and Randy Scism, CMS Offshore Racing, in the 8th lap of the race.

“Where you finish is extremely important on Sunday because it is a double-points day,” Rusty explained. “The key is to be prepared, your parts, your crew and then run as hard as you can in every single race, and then you hope for the best. One small part can take you out of a three-race series really quick. Our crew did a phenomenal job.”

Rusty witnessed the Pro Floors racing MTI wreck before his race on Sunday. That boat flipped and then was hit by WHM Motorsports in the first lap. “I have to give kudos to MTI, they build a heck of a boat,” Rusty said. “It turned over and then a boat came over the top of it and it still held up and the guys are okay.” No one was injured in the accident. Rusty purchased the Wake Effects 48-ft. MTI from Bob Bull and Bull’s crew chief Gene Geber has done double duty as the crew chief for both teams this past season. Geber will go over fulltime to Rusty’s team on Jan. 1, with Jeff Harris once again on the throttles. “We’re going to make some modifications and come out strong in Cocoa Beach in May 2017,” Rusty said. He is also planning to race in the Lake of the Ozarks Shootout Powerboat Race, as long as the dates do not conflict with the SBI schedule.

This article was originally posted by Janet Dabbs on LakeExpo.com.