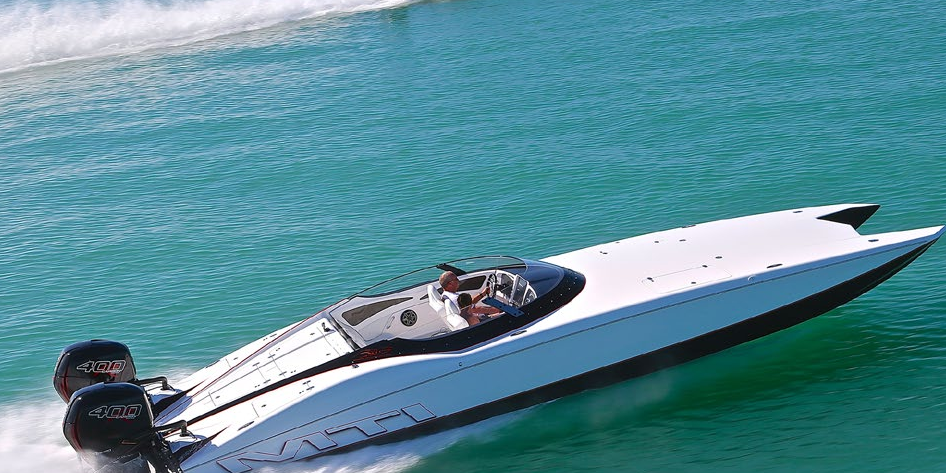 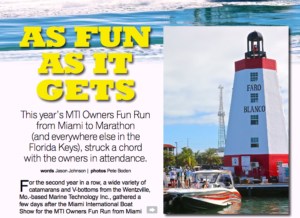 Check out this recent feature about MTI Owners Fun Run as published in the 22nd issue of Speed on the Water Magazine!

For the second year in a row, a wide variety of catamarans and V-bottoms from the Wentzville, Mo.-based Marine Technology Inc., gathered a few days after the Miami International Boat Show for the MTI Owners Fun Run from Miami to Marathon, Fla. With more than 20 boats in attendance, the run definitely showcased a little bit of everything MTI has to offer, well except for the massive 57-foot center console the company debuted at the show but took back to Missouri for some buttoning up before its delivery.

The fun run began in Miami on Thursday and headed southwest to Marathon’s Faro Blanco Resort & Yacht Club, the host location for the MTI crew as well as the Florida Powerboat Club’s Miami Boat Show Poker run, which took place at the same time. On Friday the MTI fleet headed to Island Grill in Islamorada for lunch followed by a dinner gathering back at the Faro Blanco. On Saturday, the group ventured to Key West some 45 to 60 miles away depending on if the boats took the outside or inside legs to the popular destination. Beyond that, the owners, which didn’t pay an event fee and handled their own food and lodging according to their own tastes, were on their own to have a good time and explore the Florida Keys.

While he spent most of his time with Gargiulo, in his longtime friend and customer’s breathtaking 52-foot cat, Xtreme Powerboats owner Larry Goldman had a great time assisting various customers on both the MTI fun run and the FPC poker run.