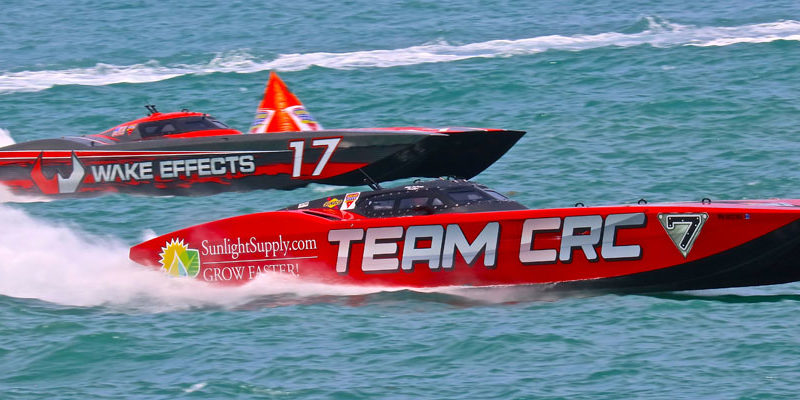 Rougher than it looked but not nearly as rough as it can be—that was the book on Sunday’s season-opening Super Boat International Space Coast Super Boat Grand Prix in Cocoa Beach, Fla. SBI’s Cocoa Beach event is notorious for consistently dishing out the roughest water of any regular-season race, but for the second year in a row the venue showed its more docile side.

The wind picked up a bit for the second race of the day, which featured the Superboat Unlimited, Superboat and Superboat Extreme classes, but while there were a few dramatic launches the bigger catamarans and V-bottoms made short work of the mildly worsening conditions.

Proving that just two boats can produce intriguing action if they’re well matched, Team CRC/Sunlight Supply and 2016 defending national and world champion Wake Effects—both 48-foot MTI catamarans powered by Mercury Racing 1650 engines—kept it close. With a seven-second lead and two laps to go, Wake Effects broke a belt, according to driver/owner Rusty Rahm who shares the cockpit with Jeff Harris, and was unable to finish the race. That left the door wide open for Team CRC/Sunlight Supply owner/throttleman Mike DeFrees and Gary Ballough—who had a really good first day of the 2017 SBI with two wins—and they didn’t hesitate to step through it to take victory.

This article was originally posted on SpeedontheWater.com.