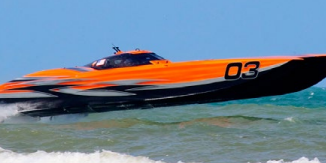 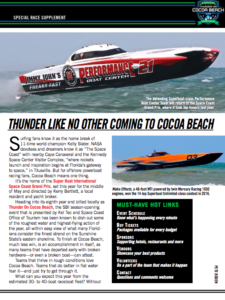 Check out the article below of Team Wake Effects and their MTI Catamaran, as featured in Speed on the Water’s March/April 2017 Magazine, page 37!

Surfing fans know it as the home break of 11–time world champion Kelly Slater. NASA devotees and dreamers know it as “The Space Coast” with nearby Cape Canaveral and the Kennedy Space Center Visitor Complex, “where rockets launch and inspiration begins at Florida’s gateway to space,” in Titusville. But for offshore powerboat racing fans, Cocoa Beach means one thing. It’s the home of the Super Boat International Space Coast Grand Prix, set this year for the middle of May and directed by Kerry Bartlett, a local resident and yacht broker.

It’s the home of the Super Boat International Space Coast Grand Prix, set this year for the middle of May and directed by Kerry Bartlett, a local resident and yacht broker.

Heading into its eighth year and billed locally as Thunder On Cocoa Beach, the SBI season-opening event that is presented by Kel Tec and Space Coast Office of Tourism has been known to dish out some of the roughest water and highest-flying action of the year, all within easy view of what many Floridians consider the finest strand on the Sunshine State’s eastern shoreline. To finish at Cocoa Beach, much less win, is an accomplishment in itself, as many teams that have departed early with broken hardware—or even a broken boat—can attest.

Teams that thrive in rough conditions love Cocoa Beach. Teams that do better in flat water fear it—and just try to get through it. What can you expect this year from the estimated 30- to 40-boat raceboat fleet?

Though he missed Thunder On Cocoa Beach last year, Unlimited-class Wake Effects team driver/owner Rusty Rahm will take on all comers with throttleman Jeff Harris this year. After all, Rahm and Harris have a 2016 world title in the class—SBI’s most powerful and mechanically temperamental category— to defend, and in the relatively short four-race SBI regular season getting off to a good start in Cocoa Beach is crucial.