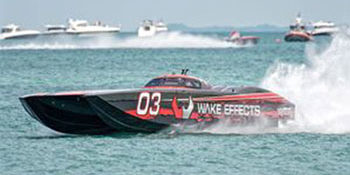 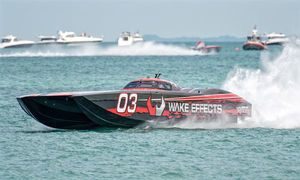 The 2017 Michigan City Great Lakes Grand Prix saw its biggest crowd to date this past weekend and competitors made sure to put on a good show! Check out the article about MTI and some photos from the event, below!

It quickly became clear during the second race of the 9th annual Great Lakes Grand Prix at Washington Park that Wake Effects had the best boat of the bunch.

Driven by Rusty Rahm, with Jeff Harris on the throttles, the boat outpaced the pack in the first few laps. Besides positioning, however, another aspect set Wake Effects apart from the rest of the field — it wasn’t nearly as loud as all of the boats against which it was competing.

“Our boat is quiet because it’s turbocharged,” said Wake Effects crew member Frank Peterson after the race. “We’ve also got an exhaust set-up that dumps down under the water, dampening the noise.

“This was a really good race for us. The water was great. The boat ran great. Rusty and Jeff did a great job.”

Wake Effects may have been a silent assassin Sunday, ripping through a flat surface and lapping most of the rest of the field, but its lack of exhaust noise did not leave the large crowd spread out along the beach in silence.

This article was originally posted on HeraldArgus.com