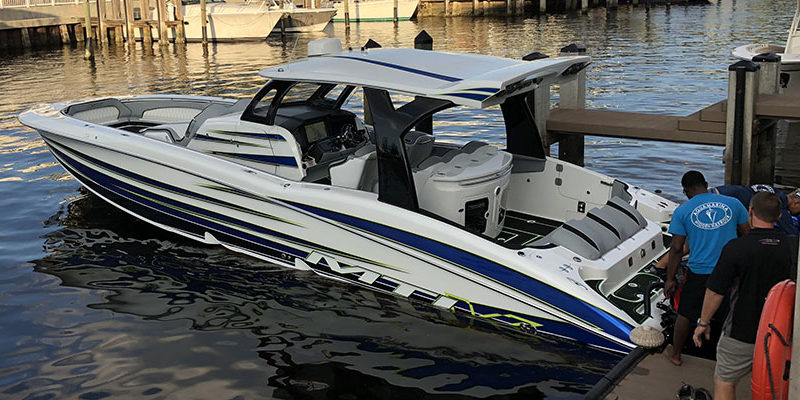 With another recent MTI delivery, Jason Johnson from Speed on the Water, captures the excitement of the new buyers as they are already planning their trips to the Bahamas as well as several poker runs around the country. Read the article below to catch the rave reviews on the new MTI V-Bottom.

If the MTI-V 42 luxury performance center console pictured below looks familiar to you, it’s because it should. The latest 42-footer delivered by the Wentzville, Mo., boat builder matches Wired Up, the 48-foot catamaran MTI delivered in August 2016 to Oklahoma performance boaters Jake and Gina Nossaman.

Powered by quad Mercury Racing Verado 400R engines, the MTI-V 42 that was painted to match the 48, which is powered by twin Mercury Racing 1350 engines, is as loaded as they come. The Nossamans ordered the center console in August to replace their 38-foot Statement Marine center console that is currently for sale at Legend Marine Group in Texas. And of course, just like the Statement that the Nossamans purchased earlier in 2016, the MTI-V 42 is chock full of speakers and electronics.

“We wanted a bigger boat so we can do some more adventurous boating to places like The Bahamas and back,” said Jake Nossaman, who also owns a home in Fort Lauderdale, Fla. “We loved the Statement—it’s a great boat—but we just wanted something larger. We looked at some other boats, like Nor-Tech’s 45-footer, but ultimately we went back to Randy Scism and the crew at MTI. It wasn’t as long of a wait, plus Randy and his team are awesome—they don’t mess around over there. They’ve taken great care of us and this boat is absolutely amazing.”