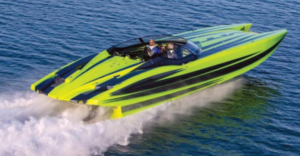 Marine Technology Inc. was featured in the January/February issue of Speedboat Magazine with a great write-up from Brett Bayne about the MTI 40 G7. Tom Stuart comments “The 40′ derives from the MTI’s original 39′, Randy Scism’s first race boat built in the U.S. “It’s had some evolution across the years, but that’s the model that started it all.”

The Missouri-based go-fast builder puts a new spin on an old favorite with a newly designed “teardrop” cockpit concept.

The 2017 edition of the Texas Outlaw Challenge saw a number of balls-to-the-wall entries participating in the annual shootout event, one of which was the 40-foot MTI Distant Thunder. Owner David Spear, running with Billy Moore, captured the win in C4P2A Class with this bright red, closed-canopy thoroughbred, and took third-place overall at the event with a speed of 150 mph on the new three-quarter-mile course. Powered by twin Mercury Racing 1350 engines, it’s a genuine head-turner, and was included in Speedboat’s coverage of Texas Outlaw in the August 2017 issue.

Now we’re stoked to feature a new 40′ MTI—this one with a G7 cockpit and twin Mercury Racing 1100 engines coupled to M6 drives. The 40′ is the first of MTI’s boats in the “mid-sized” (40-43) range to receive this newest-generation cockpit, described as a “teardrop” style — a wraparound windshield extends all the way back to the rear bench. There’s seating for six passengers, with a 22-inch GPS screen dead center of the dash for easy viewing by all. 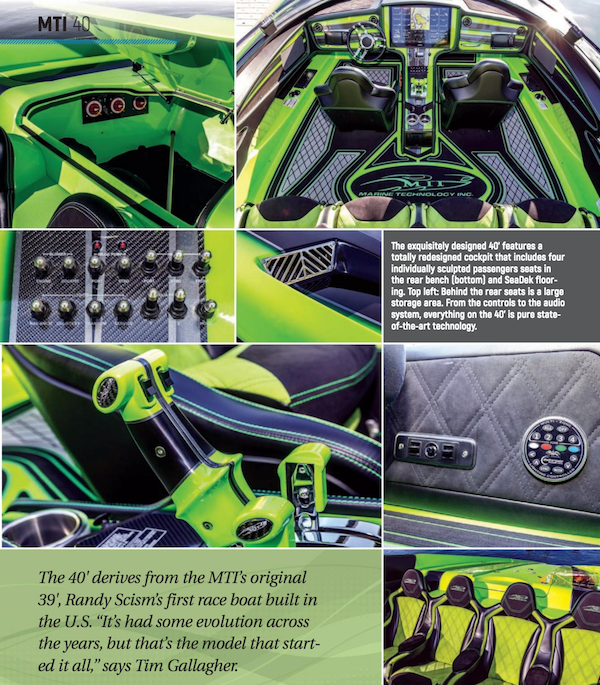 The 40′ MTI derives from the builder’s original 39’—company president Randy Scism’s first race boat built in the U.S. “That’s the model that started it all,” says MTI sales and marketing guru Tom Stuart. “It’s had some evolution across the years, but the 39/40 is based on the original race boats that Randy created.”

In addition to the electrically adjustable driver and passenger bucket seats, there are four individually molded seats in the rear bench that feature unique armrests that double as steps for easy access to the engine hatches and transom. Between the headrests are additional steps to increase make access even simpler. Directly behind these rear seats, there’s a large storage compartment for stowing your fenders, cooler, life jackets, etc. (It’s a simple but sophisticated design from a team that values extreme comfort and amenities every bit as much as speed.) There’s more storage in the sponsons, which can be accessed via a walkway area on the out-side of the cockpit’s windshield. There are two pull-up doors built into both the port and starboard picklefork areas to stow away additional items. “The storage area goes clear across through the tunnel, too,” Gallagher says. “It’s common for us to put in an electric or portable head or head in some of these models— there’s enough depth in the sponsons for them.” Our test 40′ was also loaded up with a custom stereo system with numerous speakers. This particular boat has an excellent all around setup, which includes Mercury hydraulic steering. Our dry-land inspectors were clearly dazzled by the superior quality of the 40′, awarding a perfect 10 to virtually every aspect of workmanship and equipment, inside and out, from gauge and engine installation to the paint work and upholstery. Cosmetically, the MTI is a stunner.

With the 40′, MTI has built a quintessentially functional boat that’s safe and provides a very flat-running attitude, as our photos of it at speed indicate. The driver always feels totally in control, unlike in some boats that sit up on their tail. The 40′ accelerates with gusto and carries a full load exceptionally well— with six passengers, it still runs like a freight train. We achieved a top speed of 155 mph at 6,400 rpm; it only took 4.03 seconds to get from 30 to 50 mph, 3.04 seconds from 40 to 60, and 4.71 seconds from 40 to 70. It took a mere 10.70 seconds from 80 to 120 mph. 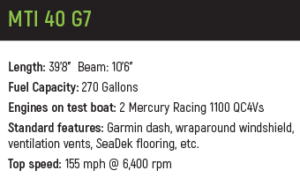 Our 40′ MTI was actually a trade-in. It was previously owned by John Caldwell of Texas, who is trading up to a 43′ MTI that was being built at press time after having put 65 hours in the 40′. “He has owned other MTIs in the past, so we’re just adding to his list,” Gallagher chuckles. “It’s actually very common. We’ve got a lot of customers who have had six or seven of our boats. It’s kind of a family thing. Once someone has been with us, they’re happy—not only with their boat, but with the whole process of building the boat and how it comes together. Some of them like to repeat that every year or two.”