Earlier this year speedonthewater.com reported on the new catamaran Arizona performance boaters Mark and Jennifer Schouten had ordered from Marine Technology Inc., in Wentzville, Mo. Fortunately I was on hand in Boyne City, Mich., when the Schoutens got to take the boat out for the first time with MTI owner Randy Scism by their side on Saturday during the 15th annual Boyne Thunder Poker Run.

Technically Scism took them out on Friday afternoon when the couple arrived in town, but it was for a brief run up and down Lake Charlevoix to make sure everything was working properly since Scism, his good friend Bob Bull, who was in town with his 48-foot MTI, and a couple of other MTI crewmembers were installing new tailpipes from Custom Marine Inc. on site Friday morning because the first set of pipes didn’t fit exactly right.

And no, I didn’t get to ride in the sweet 43-foot cat powered by twin Mercury Racing 1350/1100 engines, but I did get the chance to look over the boat and see it running in the poker run on Lake Charlevoix and Lake Michigan. I also got to interview the Schoutens, who have owned five different DCB catamarans over the past 15 years, during the awards party—and it’s clear that they are looking forward to testing the waters at different events across the country in the near future. 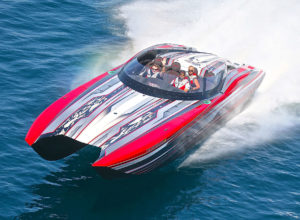 “We probably never would have come all the way up here to Michigan for an event because it’s so far from home, but when the opportunity presented itself because of the timing of when the boat would be finished, the team at MTI made it happen and we showed up,” said Mark, who named the boat El Gato Patrón, the same name that graced his gorgeous red DCB M41 Widebody powered by twin Mercury Racing 1350 engines that was on the cover of the Speed On The Water 2016 Year In Review magazine. “We’re glad we came—this event is pretty incredible. It’s been another experience that boating has given us to see a different part of the country. The best part is they have big trees, not saguaro cactus.”

This article was originally posted on speedonthewater.com