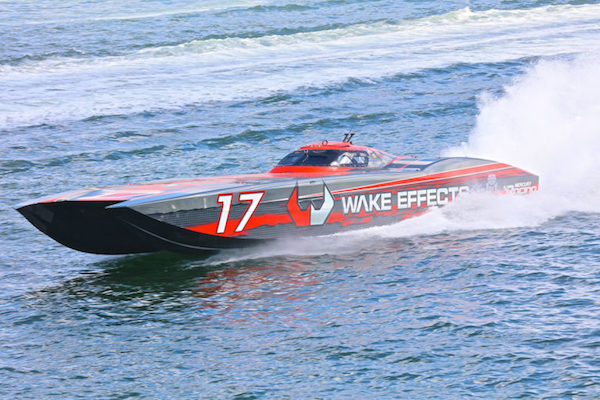 Matt Trulio, Speed on the Water journalist, ranks the 48-foot Wake Effects MTI high on list for the Superboat Unlimited class at the Key West World Championships. Rusty Rahm [driver] and Jeff Harris [throlleman] will be in the cockpit as they compete in a series of 3 days of racing for the world title, November 7th, 9th and 11th.

Check out the write-up below:

Superboat Unlimited: Wake Effects
With Miss GEICO out, Randy Scism and Bob Bull not coming back in CMS despite all the rumors and two Dubai-based Victory boats dramatically underpowered, driver Rusty Rahm and throttleman and Jeff Harris should run away with the title in the 48-foot Wake Effects MTI. That’s not to say they couldn’t best the Miss GEICO or CMS teams in Key West for the world title—they did it before in 2016—but given the likely competition this year’s world title will be all theirs to win or lose. Said Rahm, “I think dfYoung and CT Marine will run strong, and there is always the unknown with the new Huski Chocolate MTI. But will they show and, if so, how fast are they?” So sure, Wake Effects could always break. But the way I see it, they’d have to break early in all three races for any other team to have a chance.