For Bill Pyburn, an MTI is a no brainer when it comes to performance and quality. Pyburn’s new MTI-V 42 is sure to be a beauty, and we are excited to welcome him to the MTI family. Read the article below to find out more on his MTI-V 42!

While Florida performance boater Bill Pyburn and his significant other Fallon Thibodeaux were able to take in the festivities surrounding the Lake Race in Lake Ozark, Mo., last month, the main reason they were in Central Missouri was to check in on the progress of Pyburn’s new MTI-V 42 luxury performance center console powered by four of the recently released Mercury Racing 450R engines.

Based on the attention Pyburn’s long list of previous boats has received, this one built by the Wentzville, Mo.-based company is sure to get a lot of it starting at the 31st annual Lake of the Ozarks Shootout at the end of August. Pyburn, who has owned some of the fastest and most recognizable go-fast boats from the likes of Nor-Tech Hi-Performance Boats, Outerlimits Offshore Powerboats and Skater Powerboats, said he’s excited to take delivery of the new 42-foot MTI because it’s perfect for the type of boating he and Fallon (right, click to enlarge) enjoy doing in and away from Pyburn’s hometown of Jacksonville.

“I’ve ridden in a lot of boats, you know that, and for the type of boating we do, the MTI really met every criteria we have now,” said Pyburn, who recently returned from a trip to the Abaco Islands in The Bahamas in a friend’s 34-foot Nor-Tech center console so he was unable to attend the unveiling of the 450-hp, supercharged 4.6-liter V-8 outboard in Nashville a couple of weeks ago. “I’m not worried about fishing—the rod holders are for the sunshades—I need performance and overall ride quality, and the MTI has it. We were pretty much sold on it after we rode in one at Tickfaw (the Tickfaw 200 Poker Run in Thibodeaux’s home state of Louisiana) with Rusty (Williams of Performance Boat Center in Osage Beach, Mo.).

“We love the double seating behind the windshield and how well everything is laid out,” he continued. “You can tell when MTI designed it, that it was designed by boaters. Those guys have an amazing understanding of what people need for this style of boating. The 42 really lends itself well to what we intend to do on the water.”

Pyburn was able to make some minor tweaks to the graphics before the boat was completely painted, including adding the well-known silhouette that graced his Pure Platinum Skaters to the top of the boat’s massive hardtop, but most of his input was focused on interior modifications (see rendering above).

“They’ve given me some leeway to do some things to my liking; it’s going to be pretty cool,” said Pyburn, who traded in his plush twin Mercury Racing 500EFI-powered 2003 Formula Boats 400SS that is currently for sale at Performance Boat Center.

But the coolest part about the boat for Pyburn, a boater who never shies away from big power, is the four new 450R engines.

“Mercury introducing the 450R definitely played into my decision to go with the new boat,” Pyburn said. “It’s the newest thing out there motor-wise, and I honestly believe Mercury’s new V-8 platform is a game-changer for the outboard market. Whether someone wants a cat or a center console, these engines are going to be up the task. When you look at the difference in torque that the 450R offers beyond the Verado 400R (roughly 40 percent more), it’s impressive. It’s lightweight, runs on 89-octane fuel and has different gear cases available. Plus it has a three-year warranty and can be purchased with five more years of protection. What’s not to love?”

Needless to say, the team in Wentzville is excited to be building Pyburn his first MTI boat, which he’s named Platinum Addiction. 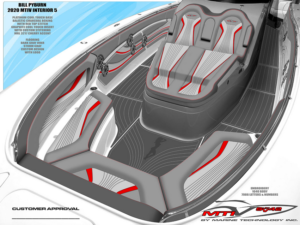 “We started building this boat for Performance Boat Center and it ended up in the hands of an incredible customer, Bill Pyburn, in time for him to make it his own,” said MTI owner and founder Randy Scism. “It’s nice to be able to officially welcome Bill to the MTI family. Mainly because he’s such a nice guy and second because has so many people that look up to him. That could only mean positive things for MTI.”

MTI is one of a few performance boat brands Pyburn hasn’t owned before. He said he’s had several conversations with Scism in the past, and that things finally fell into place with the 42-footer. He also said that he is looking forward to some of the customer service benefits MTI offers, including its owner fun run events and South Florida concierge services.

“It’s not the same, but what MTI is doing now kind of reminds me of what Mike Fiore and Outerlimits were doing 10 to 15 years ago when they’d show up to a poker run with the semi and the crew would be there to support 20 different Outerlimits customers,” Pyburn said. “At the end of the day, people don’t mind paying more for a boat knowing they are getting some things back in return.”