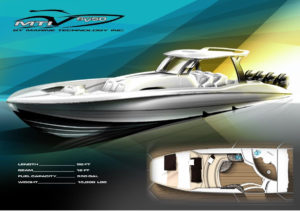 MTI has built an all-new model to add to the luxury performance boat lineup, the new SV-50 Center Console. MTI is also preparing for the Fun Run that is set for March 12-15 in the Florida Keys. Read the article below for more information about MTI’s new boat and the itinerary for the Fun Run.

On the opening day of the Miami International Boat Show, Marine Technology Inc. (MTI) announced that it is building an all-new model to add to its line of luxury center console performance boats: the SV-50. The vee-bottom boat will effectively bridge the gap between the company’s SV-42 and SV-57 models.

The announcement came from Randy and Taylor Scism, President and Client Relations Manager of the Wentzville, MO manufacturer and builders of some of the speediest boats in existence. The SV-50 will accommodate four or five outboard motors.

Meanwhile, MTI is getting ready for its annual Fun Run to the Florida Keys, set for March 12-15. According to MTI’s Taylor Scism, the run will kick off with a driver’s meeting Wednesday night; the fleet of 50+ MTIs will depart from Miami’s Haulover Marine Thursday morning and head to Gilbert’s Resort in Key Largo for a raft-up and lunch. From there, they’ll go right to Stock Island, right off Key West, where accommodations will be at the Perry Hotel and Ocean’s Edge Resort.