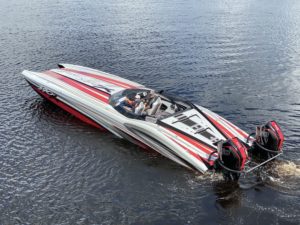 MTI boats have undeniable craftsmanship and speed. So, when two MTI customers got their boats, they also wanted an impeccable paint job by Stephen Miles to go with it. Many have seen Miles’s work, as it appeared on the new 390X this past year. Read the article below for more on two new MTI’s that Stephen Miles Designs will style!

Observant fans of Stephen Miles Design who follow the Kentucky-based boat-painting shop through its Facebook page likely noticed a new rendering for an outboard engine-powered sport catamaran. But the design, which revealed no styling cues of the catamaran in question, disappeared from that page shortly after Miles posted it.

“That was just a quick teaser,” Miles said, then laughed. “Then it vanished.”

The intriguing “sneak peek” turned out to be a paint job design for an MTI 390X catamaran. Miles will be painting two of them this year—one for longtime MTI customer Johnny O’Loughlin of New York, the other for Doug Comrie of Southwest Florida.

“They’re both great human beings,” said Miles, who tends to form strong friendships with is clients. “Both wanted MTIs and both demanded SMD paint jobs. We have been so freaking fortunate.”

Click here to read the full article from Speed on the Water!