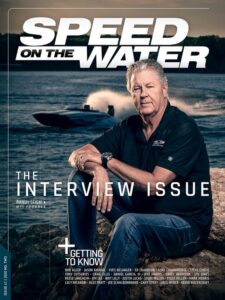 Speed on the Water has released its first ‘Interview Issue’ featuring MTI founder Randy Scism on the cover. This digital magazine that has been two years in the making has some awesome interviews, including one with Randy. For more information on what the issue entails read below. To subscribe to Speed on the Water click here!

With the mid-May launch of Speedonthewater.com 3.0—a project two years in the making—and a steady stream of daily news to keep up with seven days a week, we’ve been busier than usual of late. But when the going gets tough, the tough like to make it tougher, so we embarked on our most ambitious Speed On The Water digital magazine issue since we began publishing the bi-monthly title seven years ago.

Speed On The Water, “The Interview Issue” puts you up close and personal with more than 20 figures in the high-performance world from MTI founder Randy Scism and Appearance Products owner Craig Ellis to Mark Morris of Visual Imagination and Tyler Miller of the M-Con offshore powerboat racing team. From event organizers to sales directors, from industry leaders to poker-run enthusiasts, we deliver the human side of the go-fast boating realm like it’s never been delivered before.

Click here to read the complete and original article from Speed on the Water!