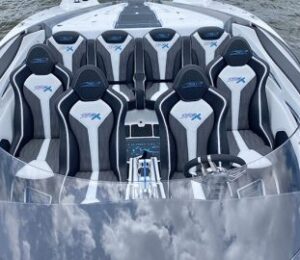 MTI has just released the new 390x with the option of seating eight people, rather than six. This spacious new design allows for two more passengers, while the arrangement of staggered seats also permits easy communication with other passengers. Read the article below for more on the features of the eight-seater MTI 390x!

As Randy Scism and the team at Marine Technology Inc., so often does, the Wentzville, Mo., custom performance boat builder created a new option for one of its boats that was driven by customer input. And participants in today’s inaugural Mercury Marine/Mercury Racing Outboard Fun Run hosted by Performance Boat Center in Osage Beach, Mo., are going to get a chance to see the company’s latest 390X demo model (in slideshow below) featuring a pair of Mercury Racing 450R engines and MTI’s first 39-footer with eight seats in the cockpit.

Following the debut of the 39-foot outboard-powered cat in November just before the Florida Powerboat Club’s Key West Poker Run, MTI has been working diligently trying to keep up with demand for the 390X, which up until this point was only available as a six-seater (far right) with two seats up front tucked behind the wraparound windshield and four seats across the back similar to its sistership, the 340X.

Such is the case no longer as a couple of customers asked if it would be possible to create a cockpit in the 390X, which has a 10-foot, 6-inch beam, similar to the one in MTI’s larger sterndrive-powered 48- and 52-foot cats, and Scism and company went to work to make it happen.

Click here to read the complete article from Speed on the Water!