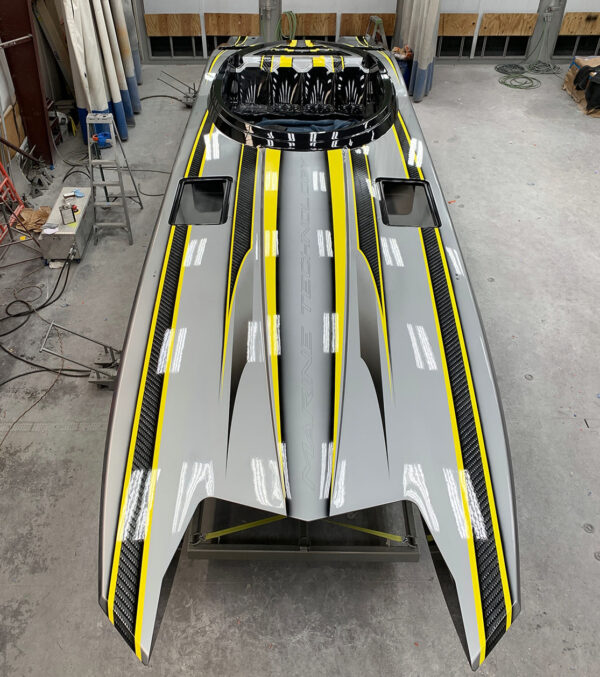 Johnny O’ Loughlin always shows out with his boat choice for the Florida Powerboat Club Key West Poker Run and this year was no exception. O’Loughlin and colleague, Jimmy McIntyre, took two new MTI 390X catamarans on the poker run to the Florida Keys. Continue reading below for more on these amazing new boats and how the guys were expected to perform during the November poker run.

New York performance boater Johnny O’Loughlin doesn’t always have a new boat for the annual Florida Powerboat Club Key West Poker Run in November, but it sure does seem that way, especially considering that in 2017 and 2019 he brought a 48-foot MTI catamaran and a matching outboard-powered MTI 340X.

The new MTI 390X catamaran pictured is powered by twin Mercury Racing 450R engines and was painted in-house at MTI.

O’Loughlin and his longtime cohort Jimmy McIntyre ran a couple of brand new boats from Miami to Key West during the FPC’s 28th annual event in November. And this year, the friends, who are behind the new Westhampton Boat Works in Westhampton Beach, N.Y., took two stunning new MTI 390X catamarans powered by twin Mercury Racing 450R engines on the 170-mile run through the Florida Keys.

“This will be our first time running the new 390s; they both were finished just in time for the run,” McIntyre said prior to the run. “We went out in the first 390 in Key West last year and Randy (Scism, MTI’s owner) let us test drive his demo in the company’s Owners Fun Run in March in the Keys. They are incredible boats. I’m not taking anything away from the 340—it’s a great boat—but the 390 is on another level because of the extra length and width.”

“Of course they both seem slow compared to a 48 with 1550/1350 engines so I guess we’re just going to have to take our time this year,” McIntyre added with a laugh in anticipation of the event.

O’Loughlin was just as enthusiastic as McIntyre about the new 390X models.

“MTI builds a great boat—I can attest to that as I’ve owned several of them,” O’Loughlin said prior to the event. “Considering the way this year has gone, I’m ready to have some fun. We’re doing the run with Stu on Wednesday and we may try to meet up with the MTI guys one day for a quick fly-by and hello.”

According to Taylor Scism, MTI’s marketing manager and sales associate, a few other new 390X customers joined the Wentzville, Mo.-based company on its run in November from Miami to Marathon. Scism also said that MTI had built 16 39-footers and had more than 20 of them on order or in production.