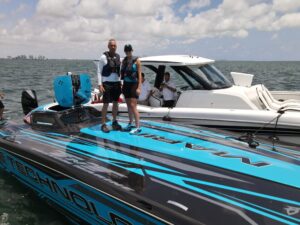 Earlier in the month, Taylor Scism and John Tomlinson were able to continue testing their new 39′ enclosed cockpit race boat. Scism, who is accustom to pleasure boats needed to get prepared in a race cockpit. Thanks to a course that was set up by Tomlinson, Scism was able to test out the new boat. To find out more about how it went and what is next for the racing duo, read more below.

First, Tomlinson—the co-owner of TNT Custom Marine in North Miami—set up a course on Key Biscayne in Miami and the two ran 20 laps in one direction and then turned around and ran in the opposite direction. He got her to turn harder and harder and the boat hit top speeds of 120 mph. Tomlinson says it has the potential to run 130 mph.

“She’s got a lot of time in the pleasure boats, so it’s a matter of time getting her comfortable in a race cockpit with limited visibility,” Tomlinson said.

Scism praised Tomlinson for not overwhelming here with too much input. “Every lap we did, he gave me a small pointer,” she said. “I was able to put it all together so by the end I was able to catch myself before he did.”

During the day on Tuesday, much of the adjustments made were focused on getting the height of their seats right. Scism, who just turned 25, is about 5’8” tall, and 58-year-old Tomlinson is 6’1”, so he needs to sit lower in the boat to have good visibility.

After putting in about five hours in the cockpit on Tuesday, Tomlinson took his new driver out into the Atlantic Ocean on Wednesday. The first race of the Offshore Powerboat Association (OPA)/American Power Boat Association (APBA) 2021 schedule is in Cocoa Beach, Fla., the weekend before Memorial Day weekend, and it’s known for being rough.

“I wanted to let her feel the bumpiness and experience turning in it,” said Tomlinson. Running in 2’ to 3’ seas, he took it easy because he didn’t want to beat up the equipment. He estimated that the team hit about 80 mph in the conditions.

Scism, who’s official title with MTI is Client Relations and Marketing, admitted that her collar bones were sore from the straps on the five-point harnesses in the boat, but other than that, she came away from her first ocean run in the raceboat with a positive impression.

“It’s a different sensation with speed,” she said of being in the enclosed cockpit. “You definitely run a raceboat a lot harder than a pleasure boat and getting used to how it steers a little different.”

She added, “I’m also getting used to how Johnny throttles. He didn’t do anything that freaked me out.”

The team is also getting used to the new data-acquisition technology in the boat as well as the rear-facing cameras that won’t come into play much in Cocoa Beach, but will definitely be helpful when more boats enter the class.

While MTI is the title sponsor for the boat, the logo sewn into the seats is TS Motorsports, which could stand for Taylor Scism or Tomlinson/Scism. When the riggers were putting in long hours to finish the boat, to hype themselves up, they would do a team cheer, shouting, “Let’s Go.” When the boat was finished, Scism was surprised when she saw “Let’s Go” painted across the tunnel tab. Other sponsors include Wozencraft Insurance, MYCO Trailers, and Positive Beverage.

When asked if being the daughter of the manufacturer of some of the most respected boats in the performance world and having a legendary throttleman in the boat with her puts pressure on Scism as a driver, she had a measured response.

“I’m trying not to let it get to me too much right now,” said Scism. “I just want to learn the course and get the seat time.”

For example, Randy Scism said his favorite MTI logo is the one that says “world champion” in it, but she’s not going to jinx herself. “I won’t use it because I’m not a world champion yet,” she said.

She also said that she’s looking forward to other boats joining the class. Veteran competitor Michel Karsenti has reportedly ordered a 36’ Doug Wright. “If it’s poker runs, I’m not super competitive, but for racing, I feel like I’ll be competitive,” said Scism.

Tomlinson said he was impressed with his new partner’s progress and expects her to continue to improve. “It’s just someone getting comfortable being confined,” he said. “It’s all just a matter of it becoming normal.”