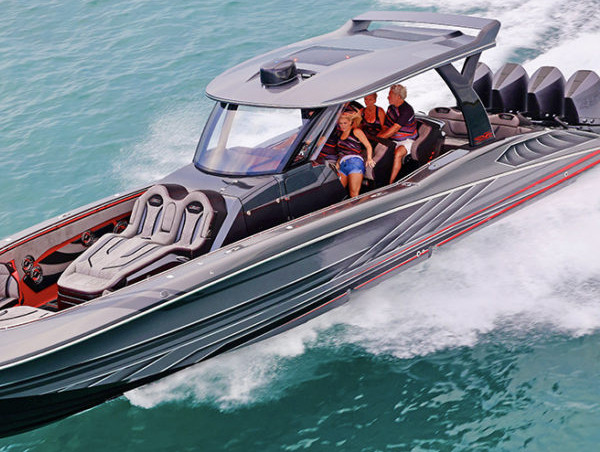 The new MTI-V 42 has already established itself as one of the best boats on the market when it comes to speed, comfort, space, and practicality. Long-time MTI owner Alan Wise has now come full circle and is back in a V bottom craft ready to enjoy his time on the water with his friends and family. Learn all about Alan’s new craft and what it took to get here!

Among the 52 MTI performance boats that tackled the recent Florida Powerboat Club Key West Poker Run, was a sparkling new V 42 owned by Nashville’s Alan Wise. That, as well as Michael Ciasulli’s fiery 390X catamaran, were two of the Wentzville, Mo., company’s most recent deliveries in the mix. The 42-footer arrived just in time for Wise, who was boat-less having sold his MTI 340X catamaran and Sunsation 34 CCX center console earlier this year.

More than a few former high-performance V-bottom and catamaran owners have gone down the outboard engine-powered center console path and found themselves missing their purpose-built go-fast boats. But Wise actually missed the versatility of his center console once it was gone. A test ride with MTI principal Randy Scism convinced him that a V 42 powered by quad Mercury Racing 450R outboard engines was the way to go.