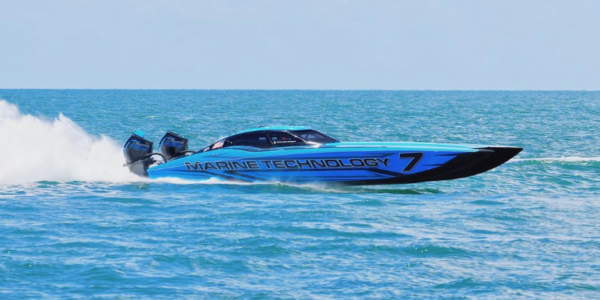 This past weekend at St. Pete’s Grand Prix, throttleman John Tomlinson, and Taylor Scism took home the win. It was an unforgettable competition that left many on their toes. At MTI, we are all continuously grateful for the support received. We hope to see you all again for our next race at Clearwater Offshore Nationals, where we aim to bring home another win.

History was made in the 450R Factory Stock Class as the competing teams earned national points in the category’s history. This was due to the fact that the race had three boats required by APBA rules to receive those points. Taylor Scism and John Tomlinson won with a 39-foot MTI, TS Motorsports, while the sistership belonging to Randy Keys and throttleman Billy Allen, KLOVAR Motorsports, took second.  Randy Keys attempted to make a comeback but Scism and Tomlinson ultimately took the lead.

The race was extra special to Scism as she gained her first points in the national championship standing.

For Scism, the race was the culmination of two years of trying to build the class and she earned her first points in the national championship standings.

“I feel like every race I get more and more comfortable, especially with Johnny and I anticipating each other’s movements,” Scism said.