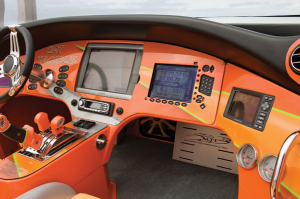 Take a ride in the 42 MTI Race/Pleasure catamaran and try not to smile. Go ahead—we dare you.- Mood Enhancer –

There’s no question that 120 mph on the water is fast and is the kind of speed to be respected. There’s also no question that in the right boat with the right driver, it’s pure joy, the kind of experience leaving you grinning. In a boat built to handle it, running that speed feels comfortable and seems effortless.

The 42 Race/Pleasure catamaran from Marine Technology Inc., is one of those exceptional boats. We’ve tested several in the past few years, and the true-tunnel model has never failed to impress our Test Team, especially in the 120-mph cruising realm in which big offshore cats often find themselves these days.

For our 2009 Performance Trials in Fort Myers, Fla., the MTI 42 Race/Pleasure had a cockpit with six bucket seats—an ideal seating configuration for the catamaran—and a pair of Mercury Racing HP1075SCi engines. MTI now offers every model it builds from 36 to 55 feet as a six-seater, which is a smart move on the builder’s part.

As expected, the boat delivered great performance in all of our tests. The 42-footer also was built with the kind of attention-to-detail buyers should rightly expect from a go-fast catamaran that retails for more than $1 million.

Having logged hours of seat time in several of MTI’s 42 Race/Pleasure models, Powerboat test drivers, Bob Teague and John Tomlinson, had high expectations for the catamaran, which had double-stepped sponsons and a true tunnel without a center pod. We’re happy to report that the 42-footer did not disappoint.

Neither test driver could find a long enough stretch of water without significant crosswinds to run the 42 Race/Pleasure to its true top speed. With its 1,075-horsepower engines turning 5,850 rpm, the catamaran topped out at 146.3 mph. Both drivers believed, under better conditions, the cat would top 150 mph.

Tall 39″-pitch five-blade Hering propellers might have cost the boat a tick or two in the standing-start acceleration department, but it still managed to reach plane in 6.7 seconds. A combination of bowrise and a tall dash made forward visibility during the process less than ideal, but it was excellent once the cat leveled off. From a standing start, the boat reached 84 mph in 20 seconds.

In handling tests, the 42 Race/Pleasure also lived up to our expectations based on past performance and was an ace in all turns. And though we couldn’t find any rough offshore water to speak of on our test day, our drivers were confident the catamaran would exhibit the same rough-water prowess they’d experienced in other 42-footers.

On the plus side, the 3/4-inch-thick acrylic wraparound half-canopy windshield provided great wind protection for the driver and co-pilot, as well as every seat of the quad-bucket rear bench. The rake of the windshield and the proximity of the twin bucket seats to the dash were such that we needed to bend backward as we got in and out of the seat to avoid hitting our heads on top of the acrylic piece.

In typical Marine Technology Inc. fashion, the 42 Race/Pleasure was built with great attention to detail. Its molten orange and red paint job was flawless, as was the mold work on its straight hullsides and flat deck.

The catamaran did not have a rubrail, and the capping of the hull-and-deck joint was—per MTI standards—as good as it gets. Hardware for the epoxy-built, vacuum-bagged model included six retractable cleats, two flush fuel fills and two power-activated deck hatches.

In a clever move, the builder equipped each hatch with a speaker on the underside. So when the hatches were raised via rocker switches at the helm, the deck of the boat became part of its stereo system.

A couple of sturdy screw jacks raised the engine hatch for access to the fuel-injected big-block engines that were installed on racing mounts and through-bolted L-angles over the smooth silver-painted bilge. The engines’ superchargers were color-matched orange, one of the primary colors in the 42-footer’s paint job. Even the tie-wraps for the wiring were orange and the wiring was supported by evenly spaced stainless-steel cushion clamps.

For easy access to the 42 Race/Pleasure’s cockpit, the builder included molded steps between the two sets of bucket seats in the rear bench. Snap-in carpet covered the cockpit sole.

The cockpit itself offered little in the way of stowage space. However, MTI did incorporate a small cabin in each sponson, one of which included a portable head. More like carpeted crawl spaces than fully functional cabins, those areas should provide more than enough stowage capacity for six people on a purpose-built speed machine.

Billet footrests were installed for the driver and co-pilot. At the helm, MTI went almost completely digital save for four gauges from Livorsi Marine—there was a pair for the water temperature next to the driver and two for fuel levels to the right of the co-pilot. A couple of Mercury SmartCraft VesselView Race Edition screens provided all the necessary operating information for the boat and its engines. Augmenting those monitors was a 12-inch Garmin GPS unit.

Offering the 42 Race/Pleasure as a six-seater was an inspired move on MTI’s part, especially in these bumpy economic times when more folks are filling their boats for poker runs and other events. The more the merrier, as anyone who gets a seat in this exceptional catamaran will surely attest.