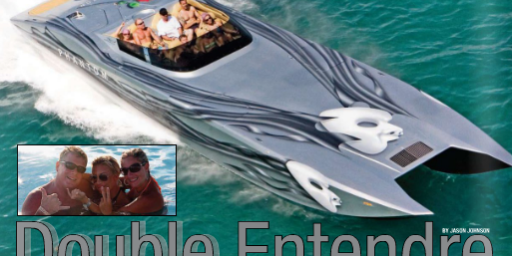 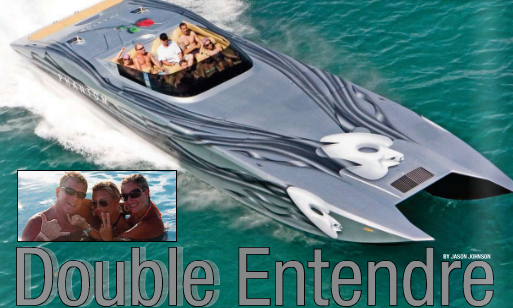 Powerboating in Paradise recently showcased several MTI boats in their Volume 12 #2 issue, as well as published an article entirely about the 48′ MTI ‘Phantom,’ owned by Kenny Armstrong. Here is an excerpt from the article.

Chances are when Kenny Amrstrong is not traveling to a trade show or a foreign country, the co–owner of Houston–based DeHumidification Technologies, LP (DH Tech) is trying to figure out a way to squeeze in some time on one of his boats.

You’d do the same if your boats included a 74–foot Viking Sportfish and a 2,150-hp 44-foot catamaran from Marine Technology Inc. (MTI) dubbed Hell Razor. And let’s not forget Armstrong’s latest “buy”—THE STELLAR PHANTOM, A 48 MTI powered by Mercury Racing 1350 engines was proudly displayed at the Miami International Boat Show in Februrary.

Inspired by Amrstrong’s 2004 Rolls–Royce Phantom, the stunning boat featured flawless silver and black paint job with a giant rose laying across the engine hatches and a white “Phantom of the Opera” mask and flowing black cape on the deck to emphasize the theme.

“That was an addition we came up with since just doing a Rolls–Royce Phantom boat would have been pretty plain,” said Armstrong, who gave a lot of credit to Randy Scism and the crew at MTI for making the project as smooth as possible. “I wanted it to be like a Rolls-Royce car, then I came up with the “Phantom of the Opera” idea and MTI ran with it. They did some research, came up with a concept, and we moved things around a bit before deciding on the final paint job.”

To read the rest of the article, as well as view the other MTI features in the magazine, visit the online version here.