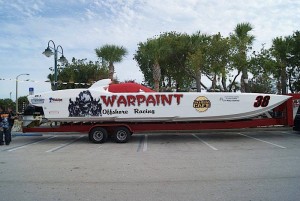 It was another beautiful day in the world of offshore racing, as boats hit the water this Sunday. Marine Technology Inc. has been a long-time fan and supporter of Super Boat International races, and couldn’t be more excited about the start of the 2013 season! Team Warpaint brought out their 42′ MTI, which debuted at the 2012 Key West World Championships out to compete in the Superboat class, alongside Team CRC, rocking their 42′ MTI, both of which exceeded average speeds of 75+ MPH! Spirit of Qatar also ripped through the waters, racing for the first time at the helm of Spirit of Qatar 20 – the ex Reliable Carriers MTI catamaran.

“The water was rough and they faced one of the toughest teams in that class, so they did what they had to do to reach the finish. It’s a long season and the target is Key West. The next race is in two weeks and we hope that the water conditions will be better.” — His Excellency Sheikh Hassan bin Jabor al-Thani, president of the Qatar Marine Sports Federation (QMSF).

Congratulations to all teams that competed! We’re already counting down the days until the 10th Annual “Thunder on the Gulf” Super Boat Grand Prix, taking place at the end of the month.

If you didn’t get to make it down to Cocoa Beach for the races, you can catch up on all the action at the official SBI livestream, here!