Offshore Only Coverage Of MTI At Lake of the Ozarks Shootout 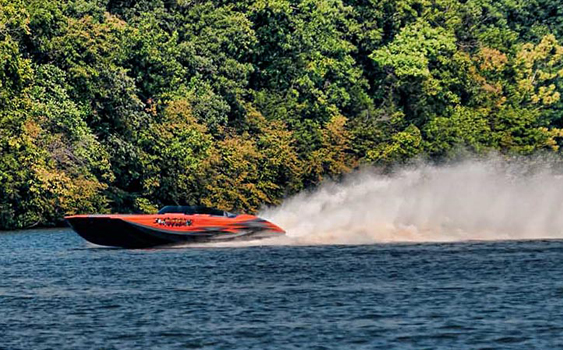 To no one’s surprise, Marine Technology Inc. (MTI) had a strong showing at the 25th anniversary of the Lake of the Ozarks Shootout last week. Practically located in MTI’s backyard on Missouri’s expansive Lake of the Ozarks, the Shootout is always a good place to spot the latest and greatest—as well as some classics—from the Wentzville-based company. Yet this year the MTI presence seemed greater than normal.

Maybe it was because MTI owner Randy Scism—the very first Shootout Top Gun winner in 1989—was one of 10 people inducted into the Shootout’s inaugural Hall of Fame, which he acknowledged as a great honor. Or maybe it was because one of MTI’s 44-foot catamarans, which the company has for sale as it was taken in on a trade recently, won “Best in Show” during Saturday night’s SuperCat Fest awards at Camden on the Lake.

Or maybe it was because the company wrapped up three brand-new boats just in time for the Shootout festivities: Vinnie Foglia’s new 44-foot catamaran with twin Mercury Racing 1100s, which you can read about in Matt Trulio’s latest column; the company’s third 42-foot center console with four Mercury Verado 350 engines that was being tested before being delivered to the owner’s home in Ohio where it will sit next to his MTI catamaran; and Bob Bull’s latest show-stopping ride, a new 52-foot canopy race boat with a similar orange, black and silver paint scheme to his 48-foot pleasure boat and 48-foot race boat.