Windship MTI Featured On Speed On The Water 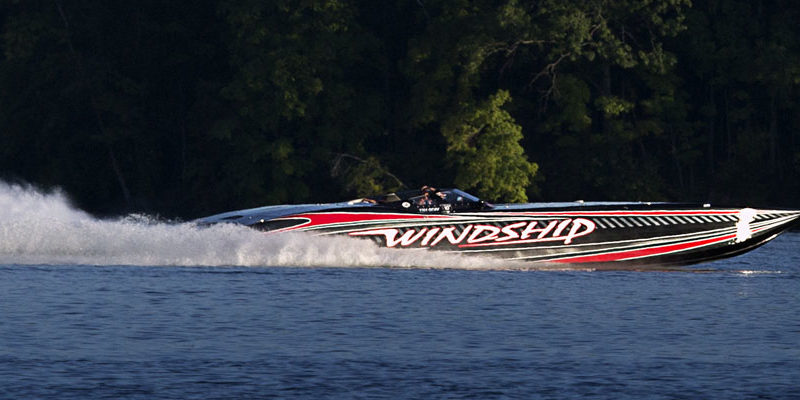 Last week, the speedy 48′ Windship MTI Catamaran was featured as the “Image Of The Week” at Speed On The Water Magazine. Check out an excerpt from the article, covering the Windship’s runs at the LOTO Shootout in August, below, or click here to read it in full.

From the build of Windship, his 2011 Marine Technology Inc. (MTI) 48-foot catamaran with twin Mercury Racing 1350 engines, to the effort he puts forth promoting the wildly successful Pirates of Lanier Poker Run, which raised more than $400,000 for local charities in July, Georgia performance boater John Woodruff doesn’t do anything halfway.

That’s exactly why Woodruff jumped at the opportunity to bring his 48 MTI and his similarly painted Bell 206L LongRanger IV helicopter to Lake of the Ozarks in Missouri when Shane Sherman—one of the organizers behind last month’s Super Cat Fest—came up with the idea of building a helipad on the docks of Camden on the Lake Resort so Woodruff could park his helicopter and boat together.

The crew at Summerset Boat Lifts brought the idea to life and Woodruff was all in. Along with his girlfriend Nancy and her three friends (who all had matching bathing suits for three different days as well as pirate wench outfits for the Super Cat Fest party), Woodruff, who had flown over the popular lake before but never hauled his boat to Missouri, was ecstatic that he was able to land by his boat, which took home the event’s best in show award, and walk right up to his room overlooking the marina.

Photo Courtesy Of Speed On The Water Magazine

In light of the recent devastating events in the powerboating industry and community, we want to take a moment to send our friends in the Abu Dhabi race team our best regards after an unfortunate crash over the weekend in Ibiza, Spain. Check out Matt Trulio’s coverage of the accident below, or click here to read it in full.

While it wasn’t the Union Internationale Motonautique Class 1 debut anyone involved had hoped for, the cockpit duo of driver Faleh Al Mansoori and throttleman Rashed Al Tayer emerged unscathed from their 48-foot Marine Technology Inc. (MTI) catamaran after the boat rolled in the first turn of the second race in yesterday event in Ibiza, Spain. The second-fastest qualifier earlier in the day, the new cat,which had taken third place in the first race on Saturday, was running second behind the Victory team when it hooked and rolled.

MTI principal Randy Scism, who was with the Abu Dhabi team in Ibiza, could not be reached for comment. Tom Stuart, the company’s sales and marketing man, confirmed that no one was injured in the crash.

“I spoke with Rashid Al Tayer, who told me the roll happened in a corner and they were pushing themselves hard,” said Gallagher. “The roll was just a part of racing—not a part we like, but inevitably a part of offshore racing.