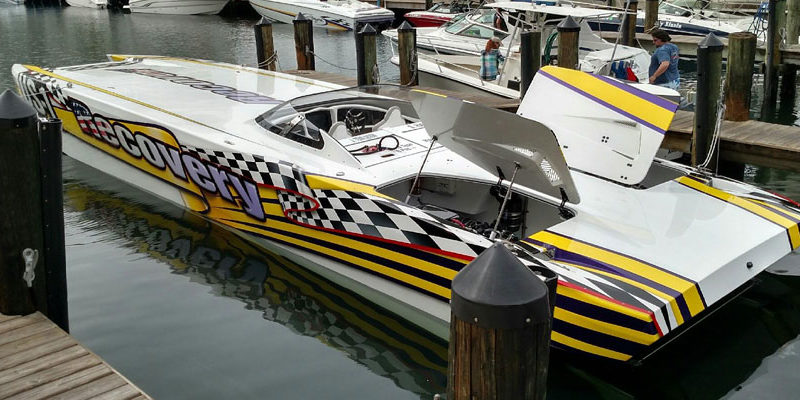 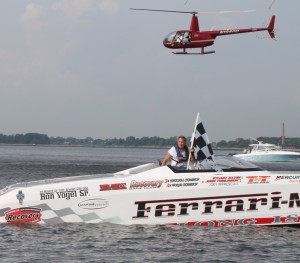 On the morning of Wednesday August 8th 2012, World Champion Powerboat Racer, Stuart Hayim, successfully broke his own record for navigating around Long Island. Hayim, accompanied by top throttleman John Tomlinson, obliterated the previous record of three hours and six minutes, which he had set himself in 1989. He crossed the finish line with a final time of two hours and 11 minutes as recorded by the National Powerboat Association.

With throttleman John Tomlinson sharing the cockpit of his 50-foot Marine Technology Inc., catamaran, retired offshore racer Stuart Hayim plans to break his own record for circumnavigating Long Island, N.Y., this summer. In August 2012, Hayim and Tomlinson set the existing record of 2 hours and 11 minutes in a 42-foot MTI catamaran powered by twin 1,350-hp engines from Mercury Racing. Although they had planned to take another shot at the 271-mile run last summer in Hayim’s new 50-footer—the cat has a shorter deck than the “standard” 52-foot MTI cat—with twin Mercury Racing 1650 engines, time constraints forced them to scrub their attempts.

Photo Courtesy Of Speed on the Water

According to Tomlinson, the engines in the cat are essentially new—they have less than six hours on them including Tomlinson’s test session in the boat last week. Also new is the cat’s Recovery paint job. Two months ago, the boat’s vinyl graphics were replaced with the current paint scheme based on the graphics from Hayim’s former Recovery team offshore raceboats.

“I sent the boat up to New York last summer for the run, but after it got cancelled it came back down here,” said Tomlinson. “It’s been here ever since, and I did some testing in it last week to prepare for the summer run. The plan is for Stuart to come down in the next few weeks so we can run it together.”

As for Hayim’s stated sub-two-hour goal of finishing the run, which he and Tomlinson will attempt solo rather than as part of this summer’s planned Race Around Long Island event (read the story), Tomlinson believes it’s possible.

“The boat is certainly capable,” he said. “As long as we have the right conditions and we don’t have any mechanicals, I think we can do it.”

This article originally posed on SpeedontheWater.com