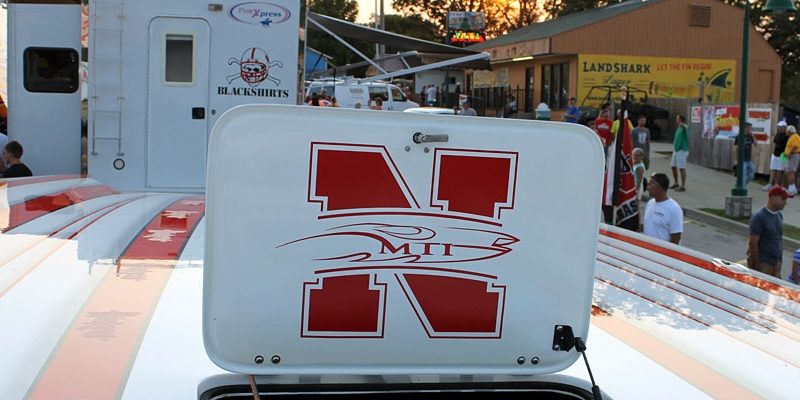 Check out this great feature by Jason Johnson of Speed on the Water Magazine, showcasing a newly revamped 48′ MTI Catamaran, styled by the Wilds in honor of their beloved University of Nebraska.

Inspired by Tiffany Wild, Randy Wild picked up a 2010 48-foot MTI catamaran a few weeks ago and went ahead with his wife’s dream—a University of Nebraska-themed boat.

Dubbed Husker Power, the red and white 48-footer with twin Mercury Racing dual-fuel 1,075/1,200-hp engines with No. 6 drives was the perfect boat to apply a Cornhuskers theme to, and it just so happened to be right in their backyard at Missouri’s Lake of the Ozarks. The Wilds, along with Jeff Huebner and his wife, Brandi, spent several days in the boat as part of the Lake of the Ozarks Shootout festivities.

“When I owned the Speed Racer MTI, it wasn’t really a boat that we could put a lot of Nebraska stuff on, nor were we going to mess with the theme,” said Wild, who owns Lake Ozarks Marine with Huebner and also is a founding member of MidwestBoatParty.com. “The next MTI we bought was blue, then the next MTI was Nail It, which wasn’t Tiffany’s favorite boat. We had Speedy for a few years, but the other two didn’t last more than a year so we didn’t have time for a conversion to a theme boat.

“Then MTI had this 48 sale—it was right here at the 6 mile marker, just 5 miles from our place by water,” he continued. “Once Tiffany saw it, she wanted it and she started planning her Husker-themed boat immediately.”

After sharing pictures with the Huebners, who are both from Nebraska too, the brainstorming began and a vinyl cutter was purchased to get things started. The end result was on display at the Shootout on the Strip, and the boat received plenty of attention between an MTI owners lunch run, Super Cat Fest and everything else going on at the popular Central Missouri lake.

Wild, who grew up in Illinois, said he has embraced the Go Big Red lifestyle and that the couple tries to attend at least one Nebraska game a year.

“If you have to join a cult, the Huskers are a pretty good one to marry into,” Wild said.

This article originally posted on SpeedontheWater.com;.