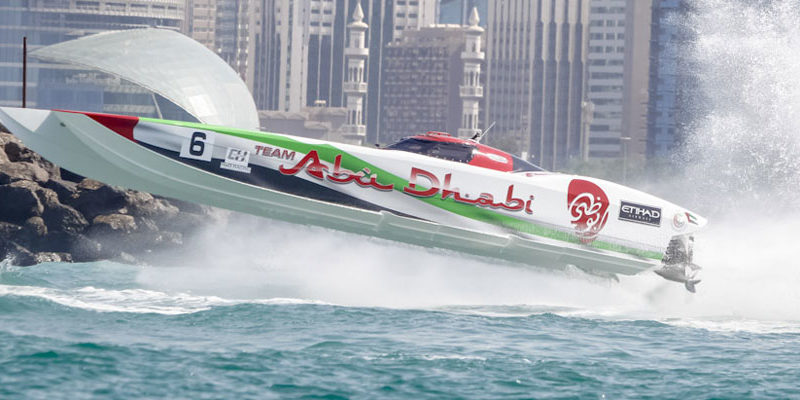 The Abu Dhabi team, in a 48-foot MTI catamaran, claimed the 2015 Union Internationale Motonautique Class 1 World Championship today by finishing second in today’s race! Read more below about the championship below!

Racing for the Abu Dhabi team in a 48-foot MTI catamaran, throttleman John Tomlinson and driver Gary Ballough claimed the 2015 Union Internationale Motonautique Class 1 World Championship by finishing second in the final race on the Middle Eastern country’s home water. Backed by two first-places finishes this season and a third-place finish, the team brought home the coveted title in a series that has seen the Victory team take top honors for the past eight years. “The top three boats finished within three seconds of each other,” said Tomlinson. “This is on a nine-mile course with four miles running on the inside and five miles running outside in the bump. We had finished third, and we were just 2.8 seconds behind the first-place boat.”

The Abu Dhabi team of Tomlinson and Ballough qualified second behind the Victory team in the morning pole-position contest, but didn’t stay there long. “I made a choice to get ahead by the first turn and stay out of trouble,” Tomlinson said. “We wanted to get to clean, calm water without all the roostertails and boat wakes. The boat hauled butt. We led for the first three laps. I was talking to (MTI founder/owner) Randy Scism on the radio and he said, ‘John, remember what you’re doing.’ So on lap No. 4 we didn’t turn as hard, Victory pulled ahead and we drifted into second and held on. You have to finish 70 percent of the race in Class 1 or you don’t get any points. I almost made a mistake the day prior. I didn’t want to do that again.” Scism, who formerly raced for the Dubai-backed Victory team and helped the country develop its dominating Class 1 program, said he was “on needles and pins” throughout the race.

“Man, I am about as happy as a guy can get,” said Scism. “This is kind of special for us. We have been gone from here for a lot of years, so to come back and do this for Abu Dhabi—it’s just so special. I was on the radio with Johnny and he told me one of the engines was ‘getting a little warm.’ We knew we had to get third place or better so he decided to keep it in second. He managed the whole race and it came to us. “I definitely have to thank the crew here, all the folks back at MTI and his Highness Sheikh Dr. Sultan Bin Khalifa Al-Nahyan of Abu Dhabi—he’s the big boss here and runs the whole program,” he added.