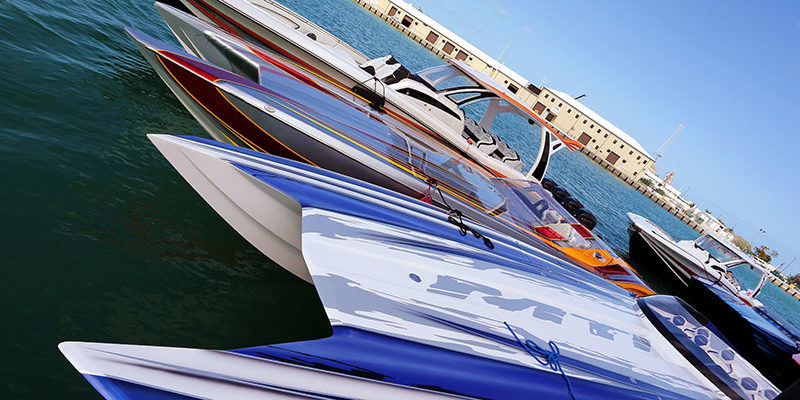 Speed on the Water publishes “Images of the Week“, showcasing some of the sleekest, fastest, most sought-after powerboats in the industry. Check out one of their latest, including images from the MTI Fun Run from Miami to Marathon!

Between the 48-foot cats, 42-foot V-bottoms and more, a color collection of MTIs took part in the company’s recent Owners Fun Run from Miami to Marathon.

If the recent Marine Technology Inc. Owner’s Fun Run to Marathon, Fla., was any indication of what’s in store this year, MTI V-bottom and catamaran owners better be ready for an eventful 2016 season. A dozen of the Wentzville, Mo., company’s boats participated in the run from Miami to Marathon’s Faro Blanco Resort & Yacht Club the weekend following the Miami International Boat Show, and all of the participants enjoyed their time cruising around the Florida Keys.

The event, which was captured by in photos and video by Joe Marin of New Orleans-based Lumintec Media(check out the slideshow and video below) and Florida-based speedonthewater.com photographer Pete Boden of Shoot 2 Thrill Pix, featured a lunch run on Friday to Key West, which is where Boden caught up with the group and shot the image above.

Tom Stuart, MTI’s Sales and Client Relations, said the fun run was well received and that the company is looking to do a few more events for its owners, including a large outing around the Lake of the Ozarks Shootout in Missouri in late August.

“We’re planning a pretty big gathering around the Shootout,” Gallagher said. “I’ve got a couple of other venues in mind but nothing we’re ready to announce. Our owners truly enjoy each others company so we’re trying to provide more opportunities for them to get together.”