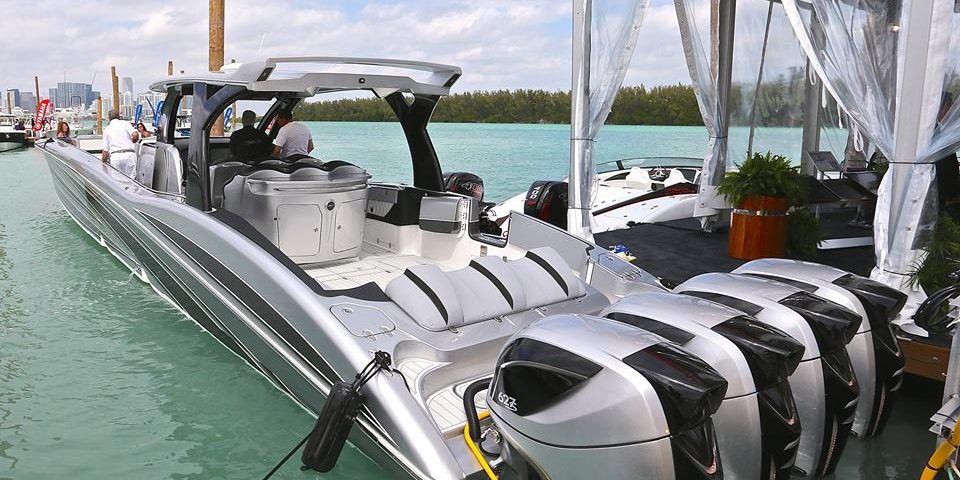 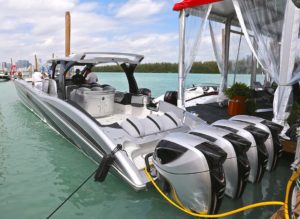 The new MTI-V 57 was a huge hit at the 2017 Miami International Boat Show! Check out a recap of MTI’s experience at the boat show, as compiled by Jason Johnson of Speed on the Water, below.

Despite having a half-dozen stunning MTI models surrounding it at the docks of Miami Marine Stadium Park & Basin for the first day of the 2017 Miami International Boat Show, the all-new MTI-V 57 grabbed most of the attention at the Wentzville, Mo., company’s booth. And for good reason since the first production-built 57-foot luxury performance center console, which featured four Seven Marine 627 engines, is the manufacturer’s latest and greatest—and biggest—model to date. Borrowing much of the styling and design cues from the MTI-V 42, the new 57-foot V-bottom makes the 42-footer look small, which isn’t easy to do.

“This is by far the most extensive boat we’ve built—it’s been a huge project and we’re excited to be able to show it off here in Miami,” said Randy Scism, MTI’s founder and owner. “The feedback so far has been great; everybody loves the boat, but we’ll have to see how we do at the show. That will be the real gauge.”

Although he hasn’t been able to run the boat wide-open throttle—the 627-hp engines have to stay below 3800 rpm for the first six hours in break-in mode—Scism said he’s been impressed with the 57-footer’s ride so far.

Pete Boden, a U.S. Navy veteran, is a self–taught photographer who has lived much of his life in the world of powerboating. He began his professional photography career in 2006, and since has been able to travel all over the United States covering events. From everyone at Marine Technology Inc., we thank Pete Boden for always capturing and sharing such incredible photos. You can view more of his work, here.