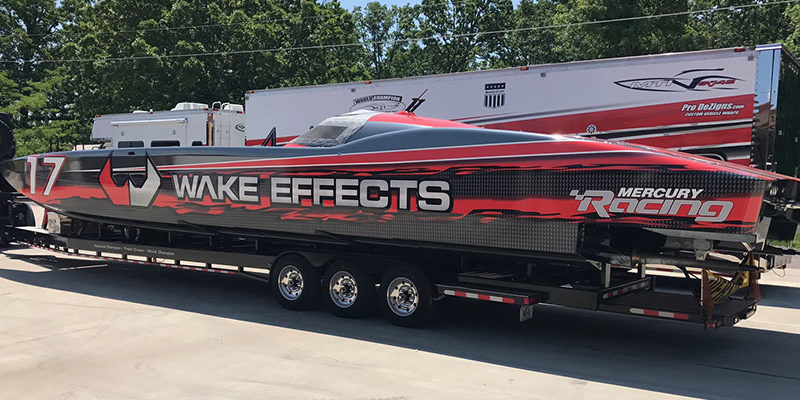 Check out Wake Effects brand new look for the 2017 Offshore Racing Season, set to debut THIS WEEKEND in Cocoa Beach!

Understanding that CMS team owner/driver Bob Bull and his longtime throttleman—Randy Scism, the owner of Marine Technology Inc. in Wentzville, Mo.—were only planning to run a couple of races in 2017 (as they did in 2016), Wake Effects owner Rusty Rahm stepped up and purchased Bull’s 48-foot MTI and the equipment necessary to run a full season during last year’s Super Boat International Key West Offshore World Champions in Key West, Fla.

Rahm, who entered his rookie season in 2016 racing alongside CMS team throttleman Jeff Harris and is racing with him again this year, also snagged Gene Greber, the CMS team’s stellar crew chief, and put him to work on the boat at the company’s Crest, MasterCraft and MTI dealership in Osage Beach, Mo. His goal was to keep the team together so he and Harris could defend their Superboat Unlimited national and world championships. And after five months of intense labor to get the boat in tip-top shape—inside and out—the finished product is going to be on display this weekend in Cocoa Beach, Fla., for the season-opener, the eighth annual Space Coast Super Boat Grand Prix.

The changes, which are quite dramatic given that the 48-footer now boasts the No. 17 and a stylish red, black and silver graphics wrap designed by Visual Imaginations’ Mark Morris that complements the Wake Effects branding quite well, included a complete re-rig of the boat from the transom to the cockpit. The cockpit, according to Rahm, received the most substantial transformation since everything was designed, repositioned and tailored to fit him and Harris.

“I need to thank Gene and the rest of our team for putting so much hard work into the boat this offseason—it is amazing,” said Rahm, who is dedicating this weekend’s race to a close family friend and huge Wake Effects racing fan who hasn’t been doing so well lately, Donald Wright of Lenexa, Kan. (pictured in image at right, click to enlarge). “It wasn’t an easy task, but everything got completed thanks to some extremely long days. I couldn’t more excited for our team and for what’s in store this season.